WENDY LOGGIA, "I Wanted to Love This: 7 Reasons Why Your Manuscript Gets Declined" 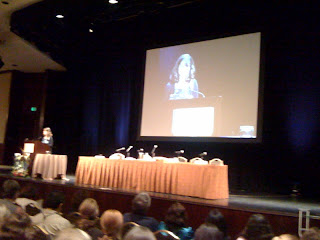 WENDY LOGGIA, "I Wanted to Love This: 7 Reasons Why Your Manuscript Gets Declined"

WENDY LOGGIA BIO: Executive editor of Delacorte Press, an imprint of Random House Children's books; the focus at Delacorte is almost exclusively on middle grade and YA novels. She is the editor of THE SISTERHOOD OF THE TRAVELING PANTS series by Ann Brashares, the GEMMA DOYLE trilogy by Libba Bray, as well as several debut novels by SCBWI members including Kristin O'Donnell Tubb's AUTUMN WINIFRED OLIVER DOES THINGS DIFFERENT and Georgia Bragg's MATISSE ON THE LOOSE.

Wendy looks for a strong narrative voice, great stories, and for writers that display a clear authorial hand. She joked about spending "nine years crushing people's dreams" but then discussed the real reasons as to why she will pass on book submissions.

Some highlights from Wendy Loggia's panel:

-- She tells aspiring writers always to think about WHY someone will want to buy your book. They are going to pull out their wallet and spend 18 dollars or more, so make your book worth it.

-- She will pass on a manuscript that is "too similar to other novels I've worked on." Examples included writers who love THE SISTERHOOD OF THE TRAVELING PANTS series which she had edited, so they submit a novel just like it. She also says she will pass on books that are too similar to other books already in the marketplace. She says they have received a flood of similar Twilight vampire books, books about werewolves, etc.. "Instead of jumping on a trend, write what feels true to you."

-- Voice, voice voice. "I may love the concept, but I can't connect to the voice. The voice wasn't special enough, I don't see teens/tweens connecting to the voice, I think the voice is meant for adult readers. It may have great moments but if there's too much telling or not a compelling voice, I will pass on it."

-- Sometimes she will pass on a book if the author seems to be too much trouble to work with. "Working on a book is like a marriage," she says. "Editors and authors spend a lot of time together sharing ideas. It's not all fun and games. If person feels like trouble before process has even started, I don't want to get involved." She will google people who have submitted their work and read their blogs as part of her research to make her decision. She said "it's like a job interview."

These are just some of the tips she offered. All of Wendy's seven tips were all very helpful and telling to the standing-room only crowd at the main ballroom for both aspiring writers and published veteran writers. Again, another reason why this conference is so great - you get exclusive information that can really help you improve your writing and help you on your journey towards publication.