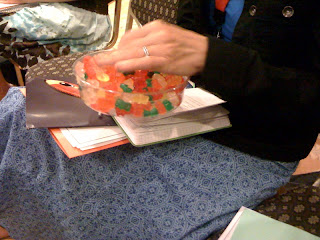 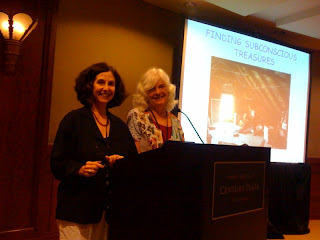 -- They also handed out gummi bears for an exercise on "Inspiration Through Observation" using facts, fantasy, feeelings, fuzzy connections. They asked everyone to observe their gummi bears with all five senses and write about it. One conference goer sheepishly raised her hand and said, "I need another candy, I already it, I'm sorry!" (gummi bears pictured above!)

-- For the gummi bear exercise, one conference goer talked about how upset the kids in Germany were when gummi bears were pulled off the market because of the spread of mad cow disease (gummi bears were made w/cow marrow)!

-- "No judgement," Ann Paul reminds conference goers so they would not be shy to share their writing.

-- One conference goer fantasized that the gummi bear was a diet pill. Everyone laughed.

-- Another held the gummi bear to her eye to look at the world through a different lens.

-- When Ann Paul asked about feelings evoked by the gummi bear, one conference goer wrote about her son being in awe of gummi bears on his ice cream.

-- Another writing exercise handout showed a black and white photo of an attic with the words, "Off in a dusty corner you find an old suitcase. You open it up and gasp. Write about what you saw inside."

-- Overall, Erica and Ann presented a wonderful and very encouraging panel for conference goers that taught them how to think outside the box and come up with inspirational ideas for stories. It was almost like attending an intimate writing workshop with your friends - although everyone in the audience didn't know each other, it became a very friendly and supportive atmosphere where everyone responded favorably to each other's writing exercises. This is another example of why the SCBWI National Conference is such a great event to attend - where else can you receive such one-on-one advice and writing critiques with famous and acclaimed writers such as Ann and Erica?