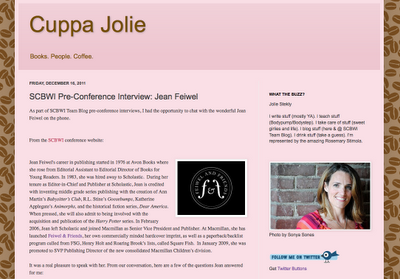 SCBWI Team Blog's Jolie Stekly interviews Senior Vice President and Publishing Director of MacMillian Jean Feiwel over at Jolie's Cuppa Jolie blog.   I loved Jean's answer to what's the one element that has to be there for a manuscript to be acquired...

Jean will be presenting as part of "Children's Books, Today and Tomorrow: Four Expert Impressions" on the Saturday, January 28 of the Lucky 13th Annual SCBWI Winter Conference in New York City.

Registration for the conference is open, and we hope to see you there!

Illustrate and Write On,
Lee
Posted by Lee Wind, M.Ed. at 2:23 PM No comments: 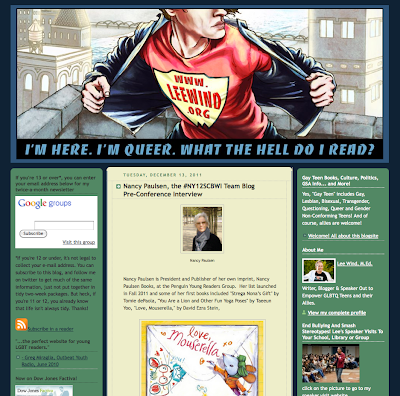 I'm delighted to share that I interviewed Nancy Paulsen, President and Publisher of her own imprint, Nancy Paulsen Books, at the Penguin Young Readers Group, in the run-up to her Saturday morning of the conference, January 28, 2012 presentation as part of "Children's Books: Today and Tomorrow: Four Expert Impressions."

We covered her list (picture books and novels) and how she builds it, trends, what she's looking for, and she shares some excellent advice for conference-goers and writers of children's literature.

And for illustrators, it's great to hear that one of the highlights of attending conferences like the Lucky 13th Annual SCBWI Winter Conference in New York City for Nancy is checking out YOUR work... and Nancy tells us about another SCBWI success story.  Two, in fact!

You can read the interview here.

And you can see Nancy in person - Registration for the #NY12SCBWI conference is open.

We hope to see you there!

Illustrate and Write On,
Lee 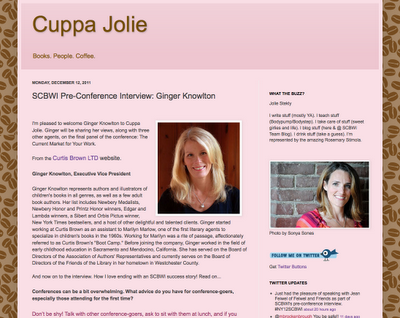 Ginger, an agent at Curtis Brown LTD, will be taking the stage on Sunday January 29, 2012 as part of "The Current Market For Your Work: Four Agents' Views" Presentation at the Lucky 13th Annual SCBWI Winter Conference in New York City.

Their interview covers some excellent advice for conference-goers, strategies and tips on submissions, and the all-important 'how do you know when your work is ready to submit?'

There's even another SCBWI success story in their interview, and you can read it here!

And you can see Ginger yourself at #NY12SCBWI.  Registration is open, and we hope to see you there!

Team Blog's Martha Brockenbrough interviews agent Rubin Pfeffer to get the inside scoop on his E-books and Apps Breakout workshops on the conference Saturday - January 28, 2012. 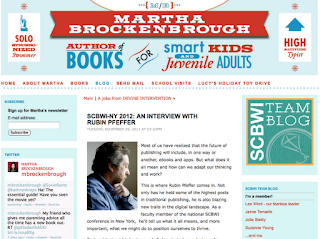 Rubin is a veteran of the children’s and adult trade industry, a visionary who's working on - as they used to refer to it when I was in grad school - the "bleeding edge of technology." He has served as President and Publisher of Harcourt Brace Jovanovich, SVP and Chief Creative Officer of Pearson, and as SVP, Publisher of Children’s Books for Simon & Schuster. Pfeffer joined the East West Literary Agency in December 2009, as a partner and established the Boston base of the agency. He works with such luminary talents as Patricia MacLachlan, Marion Dane Bauer, Steven Kellogg, Susan Cooper, Judy Sierra, David Diaz, Richard Jesse Watson, Jesse Joshua Watson, Jeff Mack, Mike Austin, and a host of other published and new talents.  In addition, he consults regularly on digital content for the Ruckus Media Group.

In the interview, Rubin also put out a call for readers to nominate our favorite book apps in the comments, so he can share and build on what we all have to say when he does his presentations.  See how innovative and cutting edge he is?

So head on over to Martha's blog and check it out.  It's a taste of one more amazing offering at the upcoming Lucky 13th Annual Winter Conference.   You can find out more and register here.

Hope to see you in New York.

Illustrate and Write On,
Lee
Posted by Lee Wind, M.Ed. at 7:42 AM No comments: