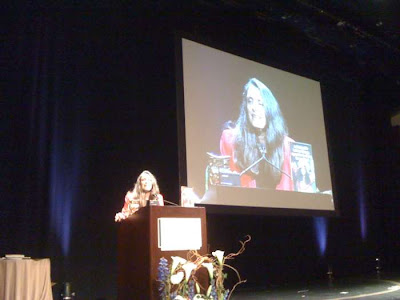 GOLDEN KITE AWARDS: SID FLEISCHMAN AWARD WINNER DONNA GEPHART
Donna Gephart's middle grade novel, As if Being 12¾ Isn't Bad Enough, My Mother is Running for President!, won the 2009 Sid Fleischman Award. This award is for authors whose work exemplifies the excellence of writing in the genre of humor.
Although Sid Fleischman wasn't able to attend today's award, he wrote a speech in her honor that Stephen Mooser read out loud. Fleischman wrote, "This year's recipient knew at age 14 that she wanted to be a writer. She saved her babysitter money to buy a typewriter."
Fleischman praised Gephart's "irrepressible humor" which was not simply full of "ornamental quotes." He said she understood the true aim of comedy, that it was "tragedy wearing a putty nose."
Fleischman joked that Gephart "... also wins the award for the longest title."
Here are some highlights from Donna Gephart's speech:
-- She screamed so loudly after getting the congratulatory phone call from Lin Oliver and Stephen Mooser that "... I lost my voice for three days."
-- When describing herself growing up, Gephart said, "I was the quintessential nerd... and I still am."
-- "This is the only award of its kind to honor humorous children's books, and it's pretty special. Even though I've been writing humor of different sorts for over twenty years, sometimes it's nice to be taken seriously."
-- Her advice? "If you've ever heard the words 'never' or 'can't,' I have three words for you. 'YES YOU CAN!'"
Posted by Paula Yoo
Posted by SCBWI at 2:11 PM