CHRIS EBOCH: "What I Learned From Nancy Drew: Tools for Fast-Paced Plotting" 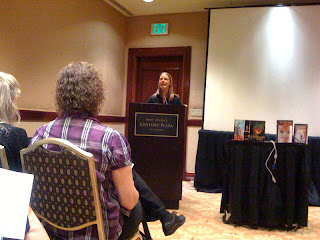 CHRIS EBOCH: "What I Learned From Nancy Drew: Tools for Fast-Paced Plotting"

It LITERALLY was a packed room for Chris Eboch's "Fast-Paced Plotting" lecture. So packed that (NO exaggeration), about a couple dozen people sat in the AISLES, taking copious notes.

Chris provided a handout with extremely detailed notes on plotting plus book recommendations. Some highlights from her handout and from the lecture:

-- She showed the original ending for a Nancy Drew cliffhanger followed by the extensive revision and discussed the reasons behind those changes. Her editor said, "I would like to see more of a slow build-up toward the intense action. In horror movies, it's always the ominous music and the main character slowly opening the closet door that scares us the most, not the moment right after she opens the door."

-- Some books she recommended included her 2009 book, "Haunted: The Ghost on the Stairs" and "Haunted" The Riverboat Phantom" from Aladdin. She also recommended Louise Spiegler's "The Amethyst Road" and "Self-Editing for Fiction Writers" by Renni Browne and Dave King."

-- Add subplot: "If you can't pack your main plot any fuller, try using subplots to add complexity and length to your manuscript. A subplot may be only loosely related to your main plot, but still add complications."

-- Chris also advised, "To keep tensions high, make sure your characters are struggling enough." She mentioned the "Rule of Three" where a character tries and fails a first time, tries and fails a second time, and then tries and succeeds, achieving the goal by the third time. "If the character succeeds on the first tyr, then we don't believe the problem was that difficult for that character." She said it's "satisfying" when the character finally achieves the goal by the third time and proves the problem was a "worthy challenge." Although the "Rule of Three" is used in picture books, Chris advises that in novels, there are often many steps beyond just three tries, and writers must make sure these many complications always push the story forward.

Overall, Chris had a very detailed and extensive lecture with many great tips on how to improve the plot of your novel and to make sure the pacing never drags. The handout she distributed among the standing-room-only crowd was especially valuable with her meticulous notes. Another fantastic example of the wonderful information you can learn at this conference!

Posted by Paula Yoo
Posted by SCBWI at 1:36 PM