MELISSA STEWART: "The Art of Science and NonFiction 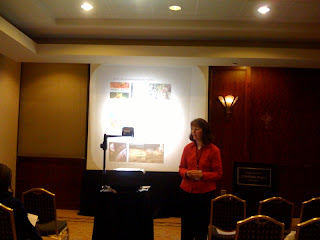 MELISSA STEWART: "The Art of Science and NonFiction"

MELISSA STEWART BIO: Award-winning author of more than 100 nonfiction books for young readers. Her latest is UNDER THE SNOW, a Junior Library Guild Selectio. She's a judge for the American Institute of Physics Children's Science Writing Award and a member of the SCBWI Board of Advisors.

Highlights from Melissa's panel on nonfiction writing for children and teens:

-- She provided a handout with lists of books to study for the following areas:

1. STRUCTURE: She recommended books such as "Beaks" by Sneed Collard, "A Place for Butterflies," by Melissa Stewart, and "Team Moon" by Catherine Thimmesh, along with several other recommendations.

2. VOICE: She recommends books like "Army Ant Parade" by April Pulley Sayre, "Lightship" by Brian Floca, and "Mammoths on the Move" by Lisa Wheeler, along with several other recommendations.

3. WORD CHOICE: She recommends "Baboons" by Melissa Stewart," "Move!" by Steve Jenkins and Robin page, and "If You Hopped Like a Frog" by David Schwartz, along with several other recommendations.

-- Her website is listed as www.melissa-stewart.com if you want more information.

-- For style, she showed example of nonfiction from an encylopedia versus an excerpt from a children's book that employed narrative non-fiction. It was very helpful for everyone taking notes on how to elevate their nonfiction from something that read like a magazine article to a narrative book form.

-- She says there's nothing wrong with a more straightforward, authoritative voice for a children's nonfiction book, but there's also room for a more casual, fresh narrative voice, depending on what is the best "voice" and "style" to tell your story and impart educational facts.

A detailed, thorough and meticulous panel that not only taught conference goers how to elevate their nonfiction projects but also provided fiction writers with great information on how to play more with language, word choice, voice, and style.