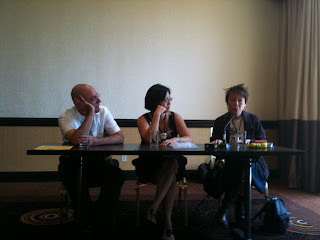 If you've ever been to Red Lobster, I wrote the menu. Crispy Golden Fries? That's me.

Hey, a menu is a story: beginning, middle, and end.

Lisa said that she was working on a book, sure that the main character was 11. She morphed into being 12. And ultimately, telling the story that needed to be told, the character ended up being 17, and the book was a YA.


Arthur's advice to Lisa back then (and now):

Just write the story it needs to be.

In all the genres, the difficulty is letting go of the anxiety of what you percieve to be the rules of the form.

Lisa chimed in on that - she had a character who was a run-away, and her first instinct was that the character would swear a lot - the percieved rules of the form. But then she realized that her character DIDN'T swear a lot.

I want to write a story, and the best story I absolutely can. When she wrote "A Single Shard," she thought it would be an adult book.

When I write my novels, I don't know where it's going to be shelved when it's out.

And they shared so much more great advice and insight!
Posted by SCBWI at 1:44 PM