DAN LAZAR: "How to Craft a Winning Query Letter: Secrets to Keep You Out of the Reject Pile" 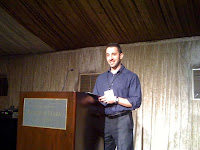 DAN LAZAR: "How to Craft a Winning Query Letter: Secrets to Keep You Out of the Reject Pile"

-- Want some of Dan's secrets to writing a query letter that ROCKS? Here are a couple tidbits:

2. If you have never been published and do not have any publishing credits, don't worry. No need to apologize or even bring that up. You don't need logos or colored paper to impress. And it doesn't hurt to open with "a specific familiar reference. "I'm a human being and I have feelings, so you should appeal to my vanity," he joked.

4. MAIN THEME: BE SPECIFIC. Dan cannot stress this enough. He says you should be as specific as possible in your query letter, from stating why you are interested in pursuing Dan as your agent, specific details about your bio, your manuscript etc.

6. For email queries: He says find out first if agents accept these - he does, FYI. Technical note: Do not include any HTML coding because that can result in inconsistent formatting and invite spammers.

And that's just the tip of the iceberg! Dan offered dozens of tips and secrets on how to write an effective query letter. It was a packed lecture hall and it was clear everyone appreciated Dan's helpful advice. Again, another reason to join SCBWI and attend these conferences for fantastic advice from veteran industry experts!

Posted by Paula Yoo
Posted by SCBWI at 11:31 AM