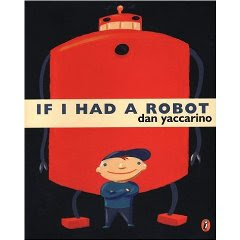 Where do Dan's book ideas come from?
From the things he loves: ROBOTS, TOYS, MASHED POTATOES.
Dan doesn't try to second guess the market and he knows that kids can smell a rat story that does not come from your heart. He makes stories that HE wants and he wants you to do the same. Send out art and manuscripts that you want to do, things that come from the heart.
Dan tells another story about seeing an editor and LYING! When Dan meets with a picture book editor to show his portfolio, the editor notices a painting in his bag that Dan had done for an editorial illustration assignment. She asks about the painting and if it has a story and he says YES (even though it didn't just yet.) He says the story is at home. She asks if he can fax it to her when he gets home. He says YES. And then on the way home he stops at Starbucks and writes the story. The kicker is only TWO words were changed from that original Starbucks story to the final published text. Maybe Dan is a robot? 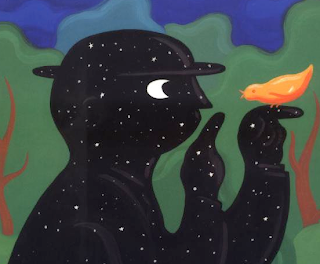 Oh jeez, he's LYING to tv producers in his next story...
POSTED BY JAIME TEMAIRIK
Posted by SCBWI at 8:59 AM