E.B. Lewis has illustrated 57 books for children in the last 17 years!

Part of the Workshops for Illustrators series (twelve illustrator workshops across six time slots over the three conference days), E.B. is excited to take us on his journey of Mastering Story.

Toni DeTerlizzi's keynote was so resonate, E.B. started out speaking about the importance of imagination for illustrators, quoting Picasso,

All children are artists, the trick is to maintain that.


He talks about how illustrators have to develop a voice, and references the 10,000 hours to master something (a powerful idea from Malcolm Gladwell's Outliers.)

Like learning a spoken language, where you need to learn the parts of speech so you can articulate the finer details, the same is true for illustrators.  You're presented a manuscript and you have to visually tell the story, re-tell the story.

He talks about the importance of doing your research, that

"we have to dig so deep to the point where we actually smell it."


For his upcoming Trouper the Three-Legged Dog (written by Meg Kearney), E.B. had to illustrate a three-legged dog.  So he had to go find a three-legged dog, and when he did, he saw how it walked.  How the tail reached out to one side to compensate.  He wouldn't have known that unless he'd done his research.


He loves Texture.  Light.  Direction.  Nuance.  Putting his own emotions into it.  In fact, he defines his voice as an illustrator as "Emotion."

When E.B. sits to do a book, he figures out his beginning, middle and end images.  That way the story is being told sequentially, it flows.  He's illustrating that with the book he illustrated, The Negro Speaks Of Rivers. 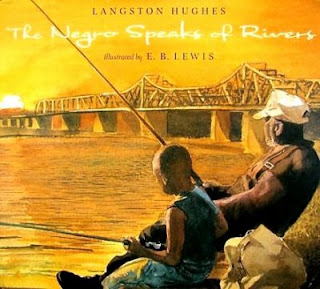 And also with the classic picture book, Where the Wild Things Are by Maurice Sendak.  E.B. is explaining how the illustrations, page turn after page turn, tell the story, even without the words.  It's remarkable.

He shares a short film clip about passion and creativity, perception and inspiration...

And E.B.'s words resonate for us,

"Writers write.  Painters paint.  Dancers dance.  Don't do it to get published.  Do it because you love it."


"As long as you are true and honest in your work, they will come and find you."