A Golden Kite for Ruta Sepetys

The Golden Kite Award for fiction goes to Ruta Sepetys for her debut novel BETWEEN SHADES OF GRAY. 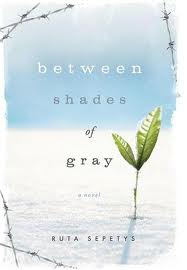 Ruta considers herself an SCBWI success story, and now she is accepting the Golden Kite for her debut novel.

Ruta needed more than luck. She needed an agent and an editor that believed that history matters. She found just that.

Ruta says she had the worst critique in SCBWI history, her first critique. She was told her story was obnoxious, annoying, that her narrative voice was grating, and if the person would have had to read one more word she would have hung herself.

She picked herself up with the help of our SCBWI community, and then sent an exclusion query for her middle grade novel to an agent and was asked to send along the full. At the last minute she decided to include the first five pages of BETWEEN SHADES GRAY, which started it all.

Ruta's husband has joked with her that one day she will receive a letter that reads:

Dear Ruta,
You owe the SCBWI everything.
From,
SCBWI