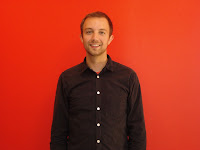 Jon Klassen is so darned talented.

He's worked as an illustrator for animated movies and music videos. He illustrated Caroline Stutson's CAT'S NIGHT OUT, Mac Barnett's EXTRA YARN, and HOUSE HELD UP BY TREES by Ted Kooser. And there's his own effort, the magnificently dark and funny I WANT MY HAT BACK, which was honored as one of the NYT's 10 Best Illustrated Books of the year.

He spoke on the picture book panel. Some highlights:

On his intended audience: "The goal is clarity" rather than talking in a kid's voice. "You just have to be as clear as you can." He doesn't think about six-year-olds or eight-year-olds because it's just too hard to imagine that.

On writer-illustrator relationship: With EXTRA YARN, he and Mac Barnett are friends and they talked about the book. "The editors knew that. It was the scariest thing ever for them."

But if you don't, you can sometimes find little surprises and "have other little characters talking to each other and sub-stories that aren't in the manuscript."

What makes a classic picture book? "All the ones that are my favorites and that I still go back to and think about, I don't quite understand them, ever. I think when you read a classic book over again, you don't do it to revisit how you felt when you first read it. You do it because you still have a crush on it ... It's walking just ahead of you."

Goodnight Moon: "That is a messed up book. It has a weird allure."

And he had this lovely quote on the feeling of a good picture book's ending: "When you close a book, you feel it land. It touches something within you without giving it too you."

On ebooks: "I like to think it's eventually going to be like the difference between movies and television." TV didn't shut down movies. They just told different kinds of stories.

Posted by Martha Brockenbrough at 10:39 AM