Dan Gutman Keynote: How A Dumbass Like Me Got 100 Books Published 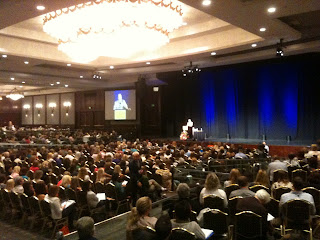 Dan Gutman published his 100th book this year, and starts off his keynote with an informal poll - what's funnier, "nose hair" or "ear hair."

With that burning topic settled, he launches into his

13 Keys to a successful career in children's books.
(Better than those 12 step programs. It has a whole extra step!)

And he's giving them to us in reverse order, to build suspense.

I won't share the stories and explanations of all of them (they're funny and profound) but here's a taste:

#13. Ignore all advice, including mine.

#11. Be a boxer. You gotta be tough.
He goes to schools with 100s of his rejection letters in a big binder to share with kids - he wants them to know that not everyone is successful right off the bat. You have to be like a boxer, take punch after punch. But then when you do achieve success, you get to laugh in the faces of those who rejected you. Ha!

#9. Don't get stuck in a rut. Try a different genre, shake it up. That's how he started the My Weird School series, but trying something new (and reverse-engineering Junie B. Jones...)

#6. Never write on an empty stomach. Always use paper. (okay, that one was a joke, but it was so funny, I had to share it!)

The rest of his tips have us laughing, and thinking, and applauding!