"If the land of children's literature were a treasure island, Sid Fleischman would have been a treasure chest of gems all by himself," said Cheryl Zach, as she introduced the winner of the award named for the late Newbery Award-winning author.

The 2012 award went to Chris Rylander, the author of THE FOURTH STALL, a Godfather-esque tale for the middle school set. Think more toilets and fewer horse heads. 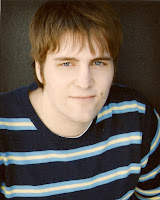 "The irony of this award is that everything I've ever written is intended to be serious," Chris said. "I never expected to be on stage accepting any award."

Chris thanked the many people who supported him, starting with his parents, who traveled from North Dakota and raised him "with books in my hands ... so that I learned to love to read on my own at a young age."

He thanked his agent Steve Malk, whom he queried in 2006 for an adult book--which Steve does not represent. (He read his query letter to Steve Malk, which included fake endorsements from Steven King, Dr. Seuss and other real authors.)

He thanked his editor Jordan Brown, who helped him transform the book and find its heart, despite the fact that he is a Yankees fan. And he thanked his team at WaldenBooks, and his wife Amanda "for giving me the best feedback I ever got about The Fourth Stall.

"It's really funny. It's really wonderful. But you made one major, major mistake."

"Chris, you can't put the F-word in a middle grade book. Especially not 37 times."

"Turns out she was right."
Posted by Martha Brockenbrough at 2:30 PM