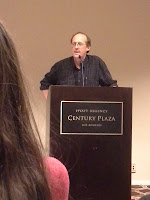 People. Gary Schmidt is a made of strong stuff. The man had back surgery three days ago. He flew cross-country to the conference--without pain meds--because he didn't want to seem loopy behind the lectern. Despite his discomfort, he hoisted a chair, acted the role of angry adult, and delivered mysterious manila envelopes to us, along with a stern warning NOT to open them.

I've never seen Jack Nicholson in "About Schmidt." But I'm pretty sure it's the Gary Schmidt biopic. And I'm even more certain that there's no one better than the Newbery Award-winning honor to show us a thing or two about developing character.

Some Gary Schmidt facts: It takes him about three years to write a book. A year for the draft, and two for the revision. As he works, he speaks with no one about it. Not even his wife. "This sometimes stresses us," he jokes.

"We need a slow accumulation of detail. We need that time," he says. "We live in a Mcdonald’s culture where everything should come to us in 45 seconds or less. Despite what American culture tells us, speed is never the friend of the writer."

Once we were finally allowed to open the envelopes, we found old photographs inside. He walked us through the process of creating a character based on the person in the photo. We generated a name. A way of walking. A way of sitting. A greeting and a farewell. How a character does these things reveals a great deal, he says. 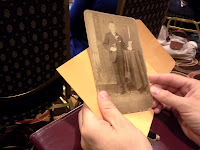 He also talked about "idiolect," language that's specific to each character, as well as setting, which isn't a backdrop but something that reveals character and responds to what's happening. And he talked about what a character wants, an object that can sometimes be invested with metaphoric significance.

The hour flew by, highlighted by a Thanksgiving story featuring closed eyes, a prayer, and a dog's tongue.

If you have a chance to hear him speak, don't miss it. He's just as wonderful as his books (a few favorites below).

Posted by Martha Brockenbrough at 5:44 PM