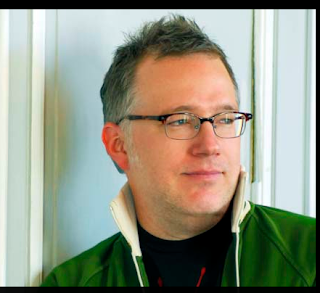 The Wond[la]rous Tony DiTerlizzi may first have caught your eye with his Caldecott Honor winning illustrations for The Spider and the Fly in 2002 (soon to be available the 10th anniversary edition!), but then he went on to amaze you with his and Holly Black's fantastical Spiderwickian collaboration, which has inspired moviemakers and other goblins since 2003.

(Have you SEEN The Spiderwick Chronicles Completely Fantastical Edition? It's gorgeous, like the best-ever DVD box set, with extra sketches from Tony, lost chapters, and guest artists (like fellow conference faculty Dans Santat and Yaccarino).

Tony starts his talk by wowing the conference with some of his new book ideas*, like Fifty Shades of Fancy Nancy.
Guys, you are really missing out, it only gets better and more hilarious from here. Especially Tony's retellings* of Alice's Adventure in Wonderland, The Wizard of Oz, and Peter Pan. 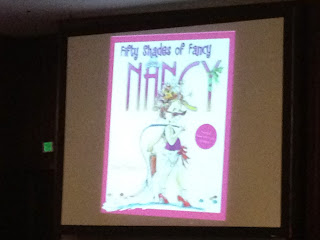 All of Tony's books have one common thread, and it's a thread that will be in all of his books to come: Imagination. It's something he thinks must be instilled at a very early age, and that imagination has changed in the last few decades. He compares the video games and TV shows of his youth to today's hyper realized and rendered games and movies—how much imagining do we really have to do now?

He takes us back to his childhood trauma of oral book reports—a smart teacher turned that trauma into a delight by asking Tony to do an illustration from his book report book, which changed how Tony approached reading. He wasn't reading for a report anymore, he was reading instructions on what to draw next.

Tony also credits Florida's overwhelming swamp heat and boringness for his wild imagination. He spent a lot of time alone in his room with a copy of Faeries by Brian Froud and Alan Lee.

Fast forward to 2002-ish, and the success of The Spider and the Fly. His editor told Tony he could do any book he wanted to next, and Tony had a big decision to make. We're so thankful he asked himself this question (and what a fantastic question for all of us!)


"What would ten-year-old Tony want
that adult Tony can make?"

He keeps a number of childhood toys around his studio to remind him of who he was as a kid—to remember the good times, as well as the times things really sucked as a kid.

Tony shares with the conference some of his book inspirations*, as well as a bit of his process* for his Wondla and Spiderwick series. Serieses. 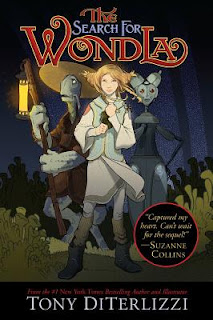 *These are worth the conference registration fee alone!