Richard Jesse Watson - The Illustrator's Journey: From Capable to Mastery - Throw Yourself Down the Rabbit Hole


Richard says:
If you want to be in this business for the long haul,
you have to throw yourself down the rabbit hole.
It takes real commitment, real attention, real therapy. Richard says you don't have to PAY for therapy, he recommends going for a walk. And like David Small said, sometimes writing and making art IS the therapy.

Richard believes one of the things that has taken his art to the next level is building mock-ups and models for his illustration. Do other great artists do this?

YOU BET YOUR McCLINTOCK! 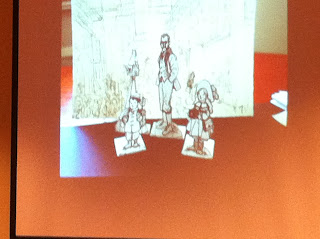 Robert McCloskey got some ducklings in anticipation of doing MAKE WAY FOR DUCKLINGS. He sketched them while they were hanging out in his bathtub. Richard told us Robert gave them liquor to calm them down.

ADAM REX, THE ZIMA OF THE CHILDREN'S BOOK WORLD?

Adam Rex is a curious, effervescent mix of writing and illustrating talents. And he is so talented nmakes sculpy models of his characters, foam core versions of important prompts, like steamboats, as well as posing for reference photos himself.

DOES AN ELEPHANT POOP IN THE WOODS? I DON'T KNOW, BUT IF IT DOES, YOU CAN MAKE A BOOK WITH WHAT COMES OUT.

Richard not only builds maquettes, not only gets wild animals (though he doesn't slip them a Mickey), not only poses for photographs, he also rents planes. Look at his lovely caterpillar maquette. Without the maquette, Richard would never have imagined such amazing shadows were possible. 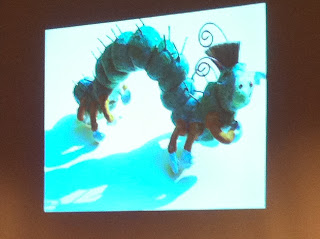 To do Tom Thumb, Richard got a pet mouse to sketch.  It would run around on his desk. The mouse was always on the move, very very hard to sketch. And the one time the mouse DID stand still, it was to pee right on Richard's final cover painting.

For THE BOY WHO WENT APE, Richard went down to Oregon to sketch chimps.

To get reference for the aerial shots in THE NIGHT BEFORE CHRISTMAS, Richard rented a private plane to fly over his hometown for a half an hour. He brought three cameras so he wouldn't miss anything, but didn't realize he'd get airsick. No one barfed, and Richard did not accidentally brain the mayor with a falling camera.


Final words from Richard on How To Turn an Industry BooHoo into a BooYah:
It's a tough time in the industry, but if you are patient, there's big opportunity. There are benefits to adversity. To paraphrase J.K. Rowling, failure means stripping away all of the inessential. Put all your energy into what you are working on, you don't have to fight the pressures of fame and fortune because you don't have any! Just do your best work.
Posted by Jaime Temairik at 12:40 PM