Ann Angel (SCBWI Crystal Kite winner for JANIS JOPLIN: RISE UP SINGING) says that now is one of the most exciting times for nonfiction. There's so much more attention being paid to nonfiction today

Janis Joplin, the subject of her recent book, was someone she idolized when she was a kid. She's currently doing research for a book in Stevie Ray Vaughan and another on human trafficking in America.

When Ann started writing nonfiction, she thought there were two ways to do it--coming at it as either a historian or a reporter. Passion is not generally a word people use to describe nonfiction, she says, but it's there. You can see it. Passion is what's necessary for a creative nonfiction writer. You can be a passionate reporter. In addition to having a narrative voice, you also can be funny, playful, personal, objective, scientific, interpretive.

When Ann writes nonfiction, she doesn't leave out the "bad stuff." You need to get the facts from primary resources, she says. She interviewed three people who were in Janis Joplin's life (friends and family) as she worked on her book. Back story is also important for giving depth to nonfiction. You have to have so much information that you feel like you've lived the life of the subject, but you don't use it all.

For trade books, nonfiction should have a third person point of view and make the reader feel like they are on the journey--the reader shouldn't be interrupted by the narrator, Ann says. 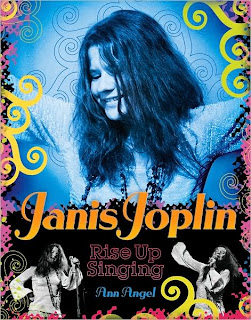