Liesa Abrams is executive editor at Aladdin, an imprint of Simon & Schuster. (She also owns 40 Batman T-shirts and apparently had a Batman-themed wedding, which sounds too awesome to believe, even if it didn't get crashed by the Joker.) Her books include DORK DIARIES, BEYONDERS: A WORLD WITHOUT HEROES, and the PENDRAGON series.

She led a Friday-morning breakout session on the sweet spot of middle grade fiction: commercial books, and started off by talking a bit about Aladdin, her imprint, which publishes picture book through middle grade, with a special focus on MG titles.

Middle grade is hot, she says. YA gets lots of attention, but many of the big properties of late have been middle grade:  Percy Jackson, Diary of a Wimpy Kid, Eragon, Harry Potter.


As a perpetual 12-year-old boy, she finds middle grade to be an exciting age to write and edit for. She still vividly remembers lying on the couch reading THE LION, THE WITCH, AND THE WARDROBE for the first time. "I don’t think reading has ever been the same as it was back then," she says. 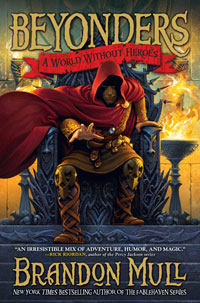 She offered a few helpful definitions and things to shoot for. First, middle grade covers a wide spectrum. It's often defined as books for readers ages 8-12. So you have to think about whether you're shooting for the younger or the older end of the spectrum. Generally, your characters shouldn't be older than 12 or 13--but your story isn't necessarily MG just because your characters are that age.

Another key consideration is to make the various components of the book relatable to kids in the middle-grade market. The plot, the theme, the voice ... they all have to resonate. Middle-grade readers have a different world perspective than a YA audience. A middle-grader wants to know how they fit into the world. A YA reader wants to know what sets them apart.

She also talked about the importance of hook. It's no less vital in a MG book, despite the perception to the contrary. A hook isn't plot. It isn't theme. It's not necessarily fantasy or supernatural. It's the thing that sets your book apart. It must be easily summarized. It can sometimes be a format thing (a book in diary or text-message format, or a mix of text and art.

You have to be careful with sex and language in middle grades (moreso than with YA). If there is any--even though those things are part of the lives of younger kids--parents will complain about it. The shorthand for this stuff is "content," and Liesa got a huge laugh when she said she had to reassure her marketing department by saying "this is a book with no content."

Posted by Martha Brockenbrough at 11:17 AM