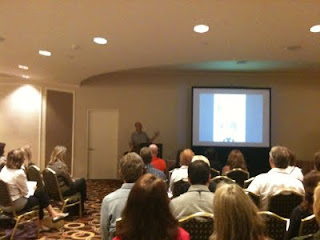 In his Breakout session, "Experimenting with Multi-Platform Storytelling," Jon dove deeper into the genesis of his four book series Spaceheadz, and how it was conceptualized and sold as half-book and half-digital program.

Spaceheadz was conceived to get kids to be media literate, giving them access, helping them analyze and evaluate and ultimately encouraging them to create media in a variety of forms.

He took the idea that everything broadcast on TV goes on and on into outer space, forever... all those "I Love Lucy" episodes, and those commercials, being watched by Aliens. And what if some of those aliens came to Earth and only knew about us from TV? From commercials?

What would they think about the Charmin toilet paper commercials? They wouldn't know what toilet paper was for. They'd think it was something that made big bears happy.

So the Spaceheadz books are integrated with digital pieces, online sites and experiences that expand on the story of three aliens and one human boy trying to save the world.

He runs down all the amazing elements of the Spaceheadz universe online, and then launches a Q&A, which covers lots of details of how he's doing it - pitfalls he and his digital team had to avoid, and advice for attendees on things to consider if we also want to take our stories across media.

It's a really valuable session, and the inspiration in the room is palpable!
Posted by Lee Wind, M.Ed. at 11:45 AM