Mary Pope Osborne: All About a Career in Children's Books

Mary Pope Osborne has written many books for kids. She is best known for her MAGIC TREE HOUSE series.

When she first started, an editors took interest and told her it was great, but that they needed to see if she could rewrite. She grabbed hold.

Mary suggests: If you get an editor who responds to you and shows any interest, grab hold because they don't do that lightly.

She says she's never been mean to myself as a writer and does not believe in writers block. She is okay with writing badly. She knows she can go back and fix it. 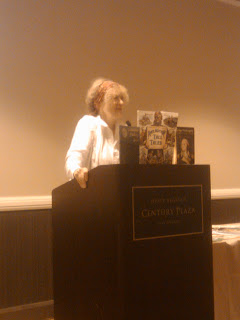 Mary wrote 4 young adult novels and 4 picture books, but still wasn't getting her head above water as an author.

Became interested in Greek mythology and pitched an idea to do a collection of stories. She began doing many retellings. She continued to write many books until an editor asked her write a series which became Magic Tree House.

Mary through herself into four of the books, and then Random House asked her to do four more. School visits became key for her. A local bookstore helped her get the visits. She believes those visits helped with the series success.

Magic Tree House has had the same editor and illustrator all these years. Wow!

A fun side note: Mary admits that she thinks the first book wasn't written well and Random House has let her rewrite the first, DINOSAURS BEFORE DARK, for the 20 year anniversary of the series.

Still today she questions when she should stop. Thinks she will when she dreads writing another one, but right now she's having a great time.

Mary admits she has boxes of things that never have never been published.

Tip: If you have a book coming out, meet the people who sell your books (meet the sales reps). Thank them, and remember them.

Tip: You should be an Authors Guild member if you've published even one book.

Tip: When you're stuck, get out of your chair, leave it and it will come to you through your subconscious. Also, keep notebooks all around because you never know when the answer will come to you.