Well if you've tried it, you'll understand that crafting a great picture book text is like mastering the art of bonsai. Every word counts. Trim here. Shape there. Let the story grow and bloom and yet keep it tightly constrained while you revise and revise... and revise until there's magic shimmering in every word, in every page turn, in every emotion.

Rukhsana Khan wrote "Big Red Lollipop," and it's a beautifully written (and beautiful) picture book about culture clashes and wanting to fit in and sibling rivalry and ultimately, love. 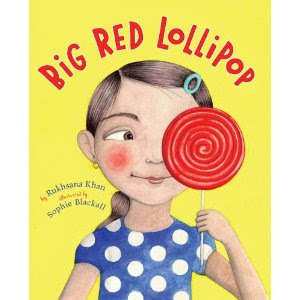 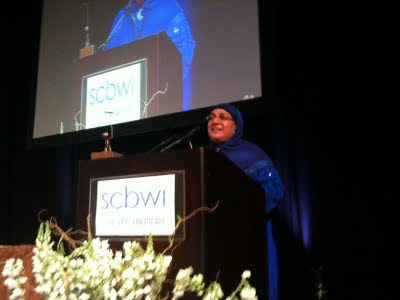 In her acceptance speech, she's telling us that she's been writing seriously for twenty-two years. And it took her ten years to write this. She's telling us that the first version of "Big Red Lollipop" showed up as an anecdote in her novel, "Dahling, If You Luv Me, Would You Please, Please Smile."

She's explaining the story behind the story - a moment from her childhood, where she wasn't the point of view character she later depicted in "Big Red Lollipop" - she was actually the younger sister who ate the lollipop!

And as an adult, she told this real life moment at a conference, and had to figure out, how do I make this a story? She uses it in workshops, and asks attendees to come up with different endings.

When you're writing a story, you can change what happens.

The ending in the book isn't what happened, but what should have.

She tried to make this story work in multiple formats over the years, (even as an easy reader), and then got the suggestion to re-write the story from her older sister's point of view - it was the breakthrough she needed and she wrote it in 15 minutes - "this story took me ten years and fifteen minutes to write."

Rukhsana is a great storyteller, and it's a wonderful picturebook!
Posted by Lee Wind, M.Ed. at 2:22 PM