Where and how did Jon fall in love with books? Not in school. Jon grew up reading MAD magazine or war comics for fun, but in school he had to read the incredibly boring Dick And Jane. They laughed at things that weren't funny. Like dishes.

"If I had only learned to read from the stuff I read in school, I don't think I would have been a reader."

It wasn't until after Jon was an elementary school teacher for a few years that he started to find all those great children's books we civilized, intelligent SCBWI members already know about.

Jon realized he wanted to make children's books, too. And some of the ways he's approached making books are outlined below: 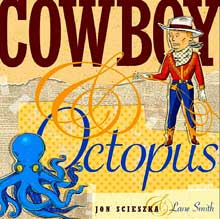 COWBOY & OCTOPUS is a tribute to GEORGE and MARTHA, FROG and TOAD. Jon tried to imagine the weirdest possible friend duo he could.

Be prepared for people to not get your twists. For THE TRUE STORY OF THE 3 LITTLE PIGS, Jon and Lane got lots of rejections from publishers like:  Too sophisticated, too dark, or code words for disgusting. 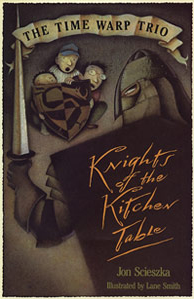 COMBINE YOUR PASSION WITH MARKET (OR DONUT) HOLES:

Jon loves history, and he noticed it was always hard to get his boy students to read chapter books, they liked thinner books with fun covers. So Jon made his books fit those limits, and THE TIME WARP TRIO was born. Not having too many rules for the magic in Jon's series means Jon can do lots of crazy stuff—going back in history, forward in time, into other books.

Jon digresses for a few minutes about Laura Ingalls Wilder, but I signed that diplomatic immunity contract in the post below and can't repeat it.

Similarly, the excellently covered GUYS READ short story collection he edits takes the sting out of too many chapters in a row.

Jon taught 8th grade algebra and for years tried to figure out how to write a funny book about math. Do you have any loves or specialties that don't seem like typical picture book fodder? 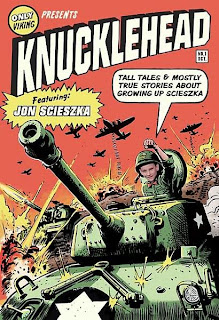 PROSTITUTE YOUR FAMILY AND FRIENDS:

Jon owed an editor a book for four years, and after the book was overdue by two years, his editor asked him to write a book about anything and suggested he write about his family.

And that's how KNUCKLEHEADS was born. Jon thinks we're all from weird families and recommends you write down your nuttiest family stories. He also recommends making your children work for you. They can build a Twitter or text a website, right?

FIND CHILDREN THAT AREN'T TIRED OF YOU YET:

"I wanted to write for pre-schoolers, my kids were older, and I'd never taught that age," says John. "To get to know that audience, I went and worked in a kindergarten near my house. I didn't realize until it was too late that pre-schoolers are insane."

"If you have a three or four year old, then you know that they're kind of like Alzheimer's patients on acid." 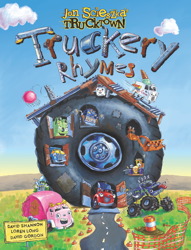 All of those pre-K or K class kids became personalities in Jon's TRUCKTOWN series. And with Trucktown, Simon & Schuster said they could be all kinds of books: picture books, like TRUCKERY RHYMES, Early readers, even sticker books.

Write your stuff, get it out there, in whatever form you can.

Below is how the audience was forced by ambassadorial guards (and that contract we all had to sign) to say goodbye to Jon.

Posted by Jaime Temairik at 2:54 PM