I fired my therapist: the author-editor relationship 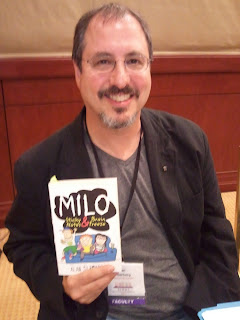 Liesa Abrams and Alan Silberberg teamed up to discuss how authors and editors can best work together. Liesa is executive editor at Aladdin, and Alan is the Sid Fleischman Award-winning author of MILO: STICKY NOTES AND BRAIN FREEZE.

Even before the session started, we could see the deep rapport these two have. No wonder they fired their therapists.

MILO is about a quirky, weird wonderful boy coming to grips with the death of his mother, something Alan related to because he experienced that loss as a child. Initially, he thought the book was going to be funny, but as he delved deeper into his memories, the book got more serious.

"The book has changed my life in so many ways," he said. "My life changed because my agent was able to take this manuscript and hand it over to Liesa."

Liesa related to the book because it was her husband's story, as well. His own mom died of cancer, and he'd spoken about it in similar ways. The closest thing she could come to healing her husband's loss was to work on this book. She really, really wanted to work on it and felt anxiety that it might not come to pass.

"This is the book that will make me feel my entire career has meaning if I can edit this book."

He read from the editorial letter Liesa wrote him, and we all got choked up. "I hadn't just found a way to get Milo published, but I had found this connection with this personal story."

One challenge was to separate themselves from the story a bit. Alan, who illustrated MILO, experimented with characters that looked less like him. Being able to have Liesa put a little distance between himself and the material allowed him to edit it from a safer place.

"I don't mean to get all therapy on you," he said, "but I really needed to feel safe to go back into these memories."

Liesa gave an example of how they shaped the story: the Milo character wrote about headaches making him think of drafting a will. It's not a kid point of view to think that way, so he wrote that Milo felt scared instead.

Liesa never asked which scenes were autobiographical (they were all emotionally true, but some were fictionalized). She was glad to have that distance, which let her look at it as a work of fiction.

"The reader only knows what's there on the page. They're reading that book. You're not there. It's not that actions can't be contradictory--you have to understand why the character is contradicting themselves."

"It's not just about the advance and the royalties," Liesa said. "It makes a world of difference to have a relationship like this... the writing is the most personal thing you can do."

Alan and Liesa made us all cry when they talked about the healing this book had brought about. “Not every editor relationship requires tissues, you know.”

Posted by Martha Brockenbrough at 3:53 PM