Lin Oliver sits down with Judy Blume, Oprah style. Like nothing I've ever seen at an SCBWI conference. 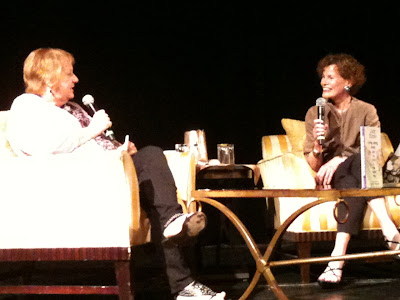 Judy Blume gives a loving shout out to John Green. (Hey, John, she just said you were, "sooo cute!")

Lin states for all of us girls that we have girl crushes on Judy Blume. So true, Lin. Yes, we do.

In the past she went right through the draft, beginning to end. She doesn't do that anymore, even though she believes it's the best way to do it.

Judy mentions, stealing from Libba Bray's words (shared yesterday), I’m so sucky at plot.
Judy Blume admits she doesn’t understand the process or how it works. But for her it starts with some basic idea that lives in the head for a long time. It lives there and it percolates.
"I start the book on the day something different happens. But sometimes you have to write many, many, many pages before you actually get the page where the book actually starts."

Lin mentions that the way Judy writes is like a direct line from kids to her. Judy says it's something she can't explain, but that she can look into a child's eyes and be that age again. "It's who you are." Who do you identify with? She identifies with kids.

How great to know that Judy Blume started like so many of us, writing bad rhyming picture books, wanting to be like Dr. Seuss. Also making the same beginner mistakes that many do and getting rejected. But she was determined!
Posted by Cuppa Jolie at 10:40 AM