Nobody every became a writer, said Richard Peck. We write in admiration of writers who are better than we are.

The book on my desk these days, he says, is STUART LITTLE. (He's currently writing books from the perspective of a mouse.) The one voice our story never needs is ours, he says.

I'm not getting pointers from STUART LITTLE. I'm getting companionship from E.B. White. That's the advantage of our field: we can talk to dead people.
STUART LITTLE was published in 1945, Richard says. E.B. White could give Stuart little an adult voice, because back then, children heard adult voices. Today the take orders from the leader of the peer group.
Why does STUART LITTLE live on? Because he's the smallest, most vulnverable character in the story, and he's the hero, Richard said.
Here is the sacred secret of what we do, Richard says:

A story is always something that never happened to the author.
E.B What was never a mouse or a spider.
J.K. Rowling never attended Hogwarts.
Stephenie Myer never got bitten by a you-know-what.

Every book begins in the library with the hope that it will end there, he says.
His message to young people: Unless you find yourself on the page very early in life, you will spend your life looking for yourself in all the wrong places. 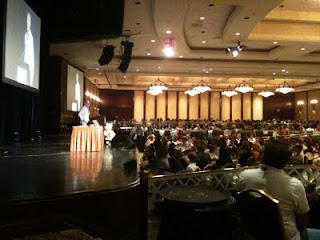