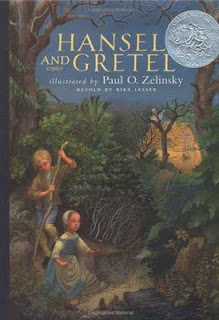 A quick social media note: Paul is on Facebook and has a public page, so please go and Like his Paul O. Zelinsky page. And he's great on Twitter, too, see links to all of that and more in this post.

What do you need to illustrate a fairy tale?
Paul grew up listening to classical records with fairy tale narrations and he'd act out those tales with family and friends. His grandmother's painting of Hansel and Gretel (that hung in his childhood room above his crib) sticks out to Paul as something that was strange and wonderful and an icon he focused on. (Easter Egg Alert: Paul pays tribute to his grandmother and her art talent by hiding an homage to her painting in the last spread of HANSEL AND GRETEL.)

Dutch Renaissance painting copying, researching period costumes, collecting images that fit the desired mood and time period are how Paul started getting ready to paint the scenes of HANSEL AND GRETEL. That and studying witchcraft at the Karl Jung Museum in New York (a hot tip from Leonard Marcus!)

After these preliminary measures, Paul enlists volunteers to model the poses he needs for the illustrations. He dresses, poses them, and does sketches and photographs of the models (his editor posed as the witch! As pose only, not in demeanor!)

His next fairy tale, RUMPELSTILTSKIN, he built similarly, but Paul wanted it to look like a different and later European art style.

WORDS TO LIVE BY FROM PAUL O. ZELINSKY:
"When in trouble, go to a librarian." 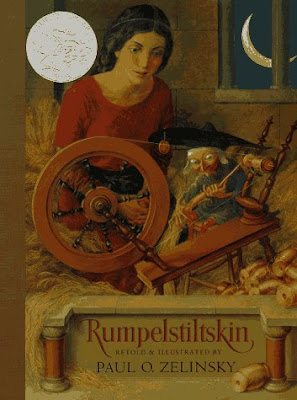 He's able to get lots of good examples of period costume and art for Rumpelstiltskin, but the BIG DILEMMA for RUMPELSTILTSKIN is

It's hard to find straw in New York, though Paul found a few photos to help. But how to draw straw, how to paint straw, that was a conundrum for Paul. So he played around, painting with tons of different techniques until he found the one he liked: it's the top left and he used a toothpick. 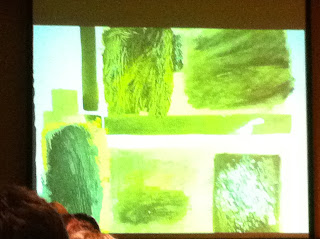 "If you want to illustrate a fairy tale, the first thing to do is consult The Calendar. It's a cycle. It's related to sun spot activity, so every seventeen years or so is when the fairytale market is up."

"Fairy tales are literally wonderful stories, stories filled with wonder, if you come at them with your heart, if you believe in them, then you can do them."
Posted by Jaime Temairik at 7:25 PM