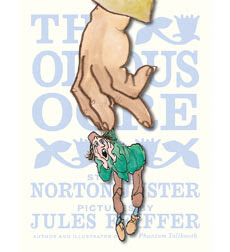 and "The Hello, Goodbye Window."

And I (and the other 1,341 people here) are eager to learn from the mind of the man who wrote the note on that famous tollbooth that read:

"RESULTS ARE NOT GUARANTEED, BUT IF NOT PERFECTLY SATISFIED, YOUR WASTED TIME WILL BE REFUNDED."

Norton's first book, "The Phantom Tollbooth," came out in 1961 (50 years ago!) And he's reflecting on how the world was a much different place then, but children's lives were pretty much the same, across generations. The great puzzle for kids is what their parents are all about.

He's recalling how one of the qualities of his own childhood was a lot of time with nothing much to do... and the resulting boredom. And says,

"Boredom is not an unmixed blessing. But you can learn a lot fighting your way out of it."

He calls himself an "accidental writer," and reads us a very funny bio of himself he wrote early in his writing career, then launches into his journey through architecture school and the Navy to go back to seeing the world how he saw it as a child...
And then he started writing - 50 pages in, a friend sent it to an adult editor, who then called Norton up three weeks later and offered him a contract.
He was sharing a townhome with illustrator Jules Feiffer at the time, and shared pages with him, and Jules did sketches... And they were wonderful.
He's sharing very funny anecdotes about his back and forth with Jules on him challenging Jules to illustrate things he knew he didn't like to draw, and Jules trying to subvert what Norton was asking for...
The general sense when "The Phantom Tollbooth" was that "no child should have to confront anything that they didn't already know," and it wasn't expected to do well...
But wow did it ever!
He's talking about his other books now, with charming make-the-audience-laugh moments. Like an idea he had 40 years ago, put in an envelope, and three years ago took it out and finally knew what to do with... And that became "The Odious Ogre."
He's sharing about creativity - how there's a mythology about ideas, and how it's not true - they do not come crashing through the window like a lightning bolt - it takes time to revise and make it work!
He's reading a passage from "The Phantom Tollbooth" (the section where the bird keeps taking everything Milo is saying out of context) to laughter and applause. And ties it together, saying,

"One of the important jobs of a writer is to help children understand that there's more than one way to look at things, and some of them are strange."

He's talking about the power of looking at things out of context, like a newspaper headline about a sick religious leader unable to give his sermon and how his wife fills in for him to great success,

And all the images just that headline brought to his mind!
You never know where you'll end up taking a wild idea and following it until you end up at nonsense... or penicillin. or gravity.
So he urges us to spend a large part of our time out of context and encourage children to stay out as long as possible!
To knock it out of the ballpark, he ends with a spoonerism poem, Prindarella and the Crince, and the room erupts in applause, and a standing ovation!
And as far as that guarantee? While it would be cool to see how our time might be refunded, everyone in the room would have to admit that we're all MORE than perfectly satisfied!
Posted by Lee Wind, M.Ed. at 3:08 PM