David Wiesner Keynote: Follow That Story - Pursue the Elusive Story Idea Wherever It Tries to Hide 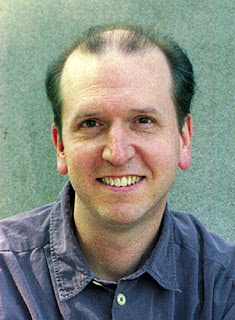 David Wiesner is nothing short of a wonder. As Lin Oliver introduced the three-time Caldecott winner, "David Wiesner's picture books defy form. Children fall into their pages because the level of artistry and detail is something that will engage a child forever. He's truly one of the greats in our field."

His books always start with pictures, no matter what their final form. He sometimes starts blind, just by drawing in his sketchbooks ... random characters, real or imagined. He puts things down and hopes for connections between them.

In the second scenario, there is an image so compelling to him that he chases after it by drawing it and redrawing it and expanding the world around it and seeing what emerges.

He started his keynote by showing us his own childhood artwork, all of which his parents saved (and, thanks to his dad, are all dated--it's amazing!). He was the youngest of five children and he had lots of art supplies, which he found intoxicating. He sometimes copied art and sometimes did originals, using pen and ink, water colors, tempera paints, even oil paintings.

In art school, he focused on watercolor and did many books with it. "That worked out pretty well," he said, in the biggest understatement of the conference.

But then he wanted to change up the medium as he approached his book ART & MAX. "I did what I always do. I started playing with the medium with no goal in sight."

It was through the working--not the thinking--that his ideas developed. He explored the characters to figure out who they were and what was happening. Watching the progression was mind-blowing, sort of like looking at a time-lapse video of a flower blooming or a city coming alive in the morning.

He also showed us some things that had influenced his style, including Salvador Dali's "deep, deep horizon lines," which appear in Art & Max, along with Jackson Pollock and Georges Seurat. (His research also includes watching cartoons.)


"By blindly wandering around with a medium, I ended up with a book."

A couple pages from the book:

His second way of following a story is the Moby Dick method, where he starts with an image that his a story buried it somewhere. His new book, MR. WUFFLES, followed this method. We won't give away much beyond saying ... cats and tiny aliens. (The book comes out in October, by the way.) 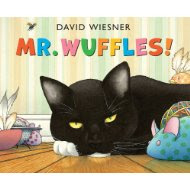 While he was working on Mr. Wuffles, he took a break with FLOTSAM. Here's a gorgeous spread from that book:

It was fascinating to watch how one idea and image led to another, and how with time and patience and most of all work, David's stories came into focus, first in sketches and then in scenes, and then into full-color paintings.

So much goes into his books and there's clearly so much joy in the process (he even made a Cat Cam so he could better understand how cats move). It was impossible not to listen and watch and be anything short of dazzled, humbled, and inspired.
Posted by Martha Brockenbrough at 10:36 AM