Carolyn Mackler: Writing, My Life, and Other Insanely Overwhelming Things 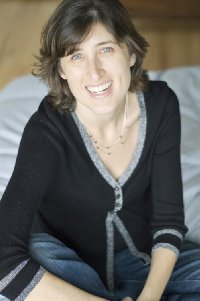 "It's not a SCBWI conference if you don't read from your high school journal."

Carolyn started her speech with a story from her high school journal, one where she met a Canadian rock band on a plane. She gave the singer her number, and it was a short-lived whirlwind adventure. It was exactly like being a teen. Like anything can happen. And sometimes it does. You can meet a rocker and he can come visit you.

A few years later, Carolyn received a fedex package. She played it for the audience: a rock song that was written for her. Sometimes, when she's overwhelmed with everyday tasks of life and motherhood, she finds herself humming her song. She misses the wonderment of the teen years. Life can be draining, and sometimes to recharge--she writes.

After college, Carolyn interned at a magazine, took a class on Beginning Your Novel. She published a few books and her career was going well. And then... she got pregnant. "It is impossible to be a hands-on parent and get lost in your stories. Okay, not impossible. But they'll eat a lot of frozen pizza."

Carolyn talked about writing a book with Jay Asher--The Future of Us. After a nine-day tour, Carolyn realized she wanted to change her life to be happier. She missed her kids and wanted to spend more time with them. So she readjusted her schedule, changed her writing times. Now she doesn't finish books as quickly as she used to. And that's okay. One day her children will lead their own lives, and she'll be able to lose herself in writing again.

"There will never be another you. You are the star of your own rock song."

Posted by Suzanne Young at 5:10 PM