The Magic School Bus pulled up to the conference and Bruce Degen, the series co-creator, welcomed us aboard with his Brooklyn accent (and despite his bum ankle).

But it's not just this series that makes Bruce such a towering figure in the children's lit community. He also wrote and illustrated JAMBERRY, DADDY IS A DOODLEBUG, and SAILAWAY HOME, among other projects.

The goal of the Magic School Bus series was to find a way to help kids laugh their way through science. He met with the author, Joanna Cole, a rare thing. "You need a referee, and that's the editor," he said. They became great friends and even moved from New York to the same part of Connecticut.

He entertained us by showing us sketches of Ms. Frizzle, who's based on one of his favorite teachers--a woman who made math fun for him. Making Ms. Frizzle a funny dresser is part of her appeal to kids. Kids also love the impossible images--for example, when the class of kids emerges through the faucets of the girls' bathroom.

He also talked about what it was like to work with Lily Tomlin as the voice of Ms. Frizzle. "She makes the show. She's perfect," he said.

There are a few jokes in the artwork: Bruce drew himself and Joanna into the illustrations a few time, including as a dinosaur. And Liz, the chameleon, is never any color except green. There's even a Latin joke about the two of them in a stained glass window illustration.

Finally, he shared information about how he got into the business. He always had to draw when he was a boy (and has a book called I GOTTA DRAW is just out). He just liked to draw, and he had scrap paper from a printer-friend of his father's. 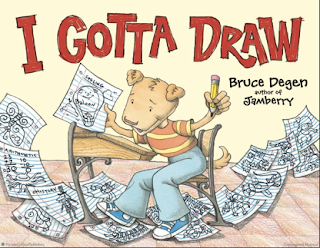 "I knew I wanted to be an artist of some kind," he said. His parents let him go the Saturday art school at the Brooklyn Museum. There was also a high school for musicians and artists (it's the Fame school).

"It was a great high school, although it meant I traveled from the depths of Brooklyn to Harlem."

Then he went to Cooper Union, an art school, in the 1960s. "Illustration was a dirty word." He studied painting and print making. Then he went to PRATT to get a master's degree. He got drafted into Vietnam before he finished, so he had to act quickly to avoid the war.


"I had a teacher's license. I ran out and got a teaching job because teaching was deferred," he said. "I became a high school art teacher and it turned out I really liked it."

He took us on a tour of his childhood as seen through the pages of GOTTA DRAW, which is sure to sell out of the conference bookstore. Thanks for the magical journey, Bruce! 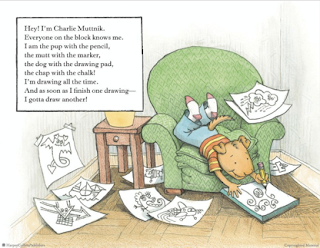