This year's Golden Kite winner for fiction is Joanne Rocklin for her fantastic book, THE FIVE LIVES OF OUR CAT ZOOK. Even if you're a dog person, this story will touch your heart and quickly become one of your favorites. 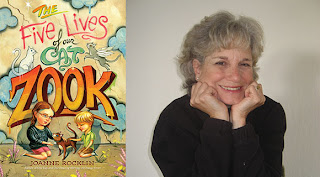 
In this warmhearted middle-grade novel, Oona and her brother, Fred, love their cat, Zook (short for Zucchini), but Zook is sick. As they conspire to break him out of the vet’s office, Oona tells the stories of his previous lives, ranging in style from fairy tale to grand epic to slice of life. Each of Zook’s lives have echoes in Oona’s own family life, which is going through a transition she’s not yet ready to face. Her father died two years ago, and her mother has started a relationship with a man named Dylan—whom Oona secretly calls “the villain.” The truth about Dylan, and about Zook’s medical condition, drives the drama in this loving family story.

Joanne Rocklin is the critically acclaimed author of several other books, including ONE DAY AND ONE AMAZING MORNING ON ORANGE STREET, which won the California Library Association's Beatty Award, the FOCAL Award of the Los Angeles Public Library, and the California Book Award Gold Medal from the Commonwealth Club. It was also voted best middle grade by the Northern California Independent Booksellers Association. STRUDEL STORIES was a School Library Journal Best Book of the Year and an American Library Association Notable Book, and FOR YOUR EYES ONLY!, was a School Library Journal Best Book and a Bank Street Best Book. Her early readers THREE SMART PALS and THIS BOOK IS HAUNTED will soon be e-books, the latter also to be released as an App.