Jon's session kicked some butt and dropped some names on the topic of boy vs. girl writing. 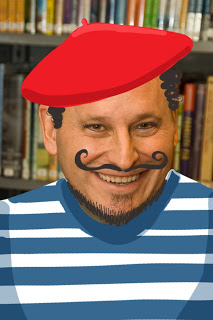 It's a prickly subject for all groups—creators, publishers, consumers—but Jon tells the conference audience they are the people that will be able to change what's going on with the wacky gender divide in children's reading (and readers).

Jon: "I had a very particular view of how the world works, mostly through wrestling. I grew up with all brothers, I lived in MANWORLD."

"But when I became an elementary school teacher I had a strange wake up call, I was now in WOMANWORLD. Everybody wanted to hear from everybody else, people cared about other opinions and feelings, things weren't decided by wrestling."


"I learned how to teach from these great, female teachers, but in class when I'd say the same things they did, the kids would respond to me as a man in a completely different way."

He felt, at the time, boys in his class all thought reading was only for girls, since only girls (mom, lady librarians, mostly lady teachers) are reading to them or seen reading books.

Jon saw this as a two-prong problem, besides not having many examples in their lives of grown men read standard-looking fiction books (papers and magazines, yes), the fact that boys develop later than girls—they're (as Jon calls it) crazy for longer, that wild energetic boy energy that may not be conducive to readying and therefore they may not be ready for reading in kindergarten/1st grade—this makes for a huge reader population divide in early elementary. And today's educational system is exacerbating the problem, pushing reading/testing earlier and earlier. Even in second grade boys reading is dicey. And if they are not reading, they feel bad about themselves and Jon sees them either pretending they read or pretending not to like it.

Jon understands this mentality because of all his time in MANWORLD. So Jon had the boys in his class reading anything they were willing to try, the sports section of the paper or Calvin and Hobbes, not required reading or books that they'd ultimately be tested on, which turned those boys into readers.

To call attention to this problem Jon established guysread.com with the simple first mission of having the site be a place to recommend good books for real boys, and to change the definition of what reading is: graphic novels, wordless books, short stories etc. 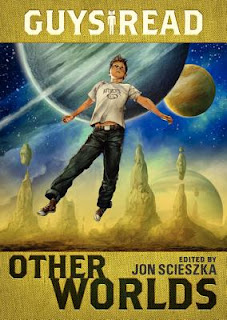 Publishers are chasing the gender extremes of super girlie pink books or super farty dude books making the girl/boy book divide more divided, but Jon wants to know what happened to the real girls and boys like those portrayed in A Wrinkle in Time? It's up to us to do something different. Just because Wimpy Kid is a huge hit, doesn't mean the next eight ripoffs will be, it's up to us to write and illustrate unique things for real boys and real girls.

Check out Jon's latest book with Mac Barnett, Battle Bunny, which you probably heard while you slept because Jon and Mac have been breaking into hotel rooms and reading to our subconsciouses. 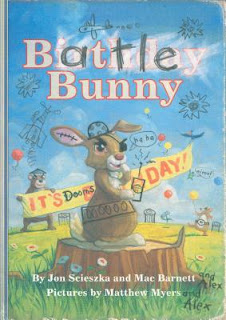 Posted by Jaime Temairik at 4:09 PM