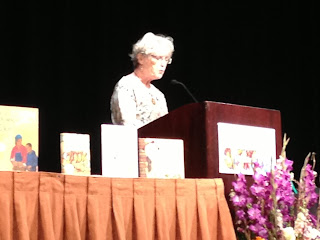 Jeri has written 12 biographies, this is her first picture book biography.

Jeri defines the word "appreciation" for the crowd before giving her generously offered thank yous.

Originally her manuscript listed her word count on the first page, which was over 2000. When she received it back from her editor, that number was crossed out and next to it read, "Not any more." 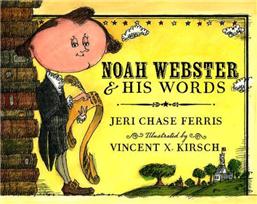 Noah was a master of self-promotion. He travelled all across the 13 states, speaking, and giving free copies of his book to librarians and teachers. One only knows what he could have done with Facebook and Twitter.

Everyone knows the one book he wrote that took 20 years (it reminds me of my current work) but he was also a major reason the States stayed united. Language was the tie.