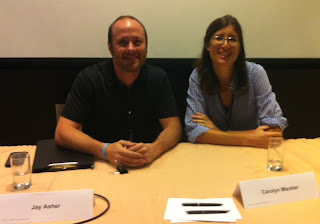 Jay Asher's debut teen novel Thirteen Reasons Why, spent over two and a half years on the New York Times bestsellers list (and began as a SCBWI Work-in-Progress Grant). 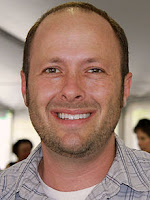 Carolyn Mackler is the best selling author of teen novels including The Earth, My Butt, and Other Big Round Things, Tangled, and Vegan Virgin Valentine. 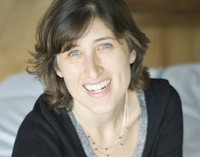 Together, Jay and Carolyn wrote The Future of Us, and their workshop focused on how the process worked for them. They offered some helpful advice, and they were both hilarious and kept the audience entertained. 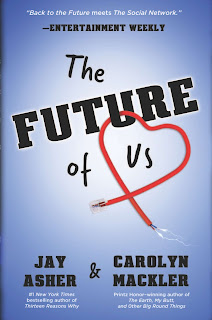 "Cowriting a book is like chewing someone else's gum for them."

Carolyn started by telling the audience how she and Jay met (which she kind of remembers) eight years ago. Since then, they've always taken turns editing each other. Jay edited a line in one of her books and Carolyn edited his blurb.

One comment that really resonated was when Carolyn said that she and Jay were not friends when they started writing together, and she thinks that's part of why it worked. The benefit was that they came in with mutual respect for the other author without baggage or other motives.

Carolyn and Jay started their book journey by brainstorming ideas, both wanting a story that was plot driven. They spent time developing a coauthored voice so that the book would read as if it was written by one author. The process became part workshop as they wrote because in the back and forth they were teaching each other.

Carolyn stressed that their process is worked for them, but it may not work for everyone. Before writing, they worked out the message, tone, and level of seriousness the story would need.

They also suggest authors consider their agents since they will have to collaborate too when it comes to selling the book.

Jay talked about other coauthored books, including JUST LIKE FATE by Cat Patrick and Suzanne Young and NICK AND NORAH'S INFINITE PLAYLIST by Rachel Cohn and David Levithan, and explained how the writing approach or style was different. When coauthoring, it's important to find what will work for both of you. 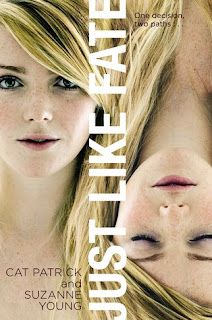 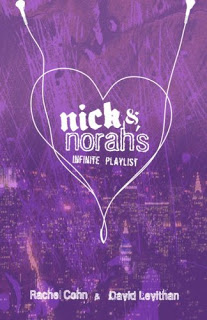 In the end, Carolyn and Jay read a passage from THE FUTURE OF US from first draft to final revision. It was hilarious to see how the little tweaks changed and ultimately improved their book.

Posted by Suzanne Young at 1:25 PM