Author Mike Jung's workshop on Making Fantasy/Sci-Fi Elements Thrive in a Contemporary Setting was standing room only. The place was packed! Mike is a SCBWI success story, having met his editor, Arthur Levine, at this conference in 2010. His debut novel Geeks, Girls, and Secret Identities was recently released. To start his session, Mike invited Arthur Levine up front and they sang a song while Mike played the ukelele. :) 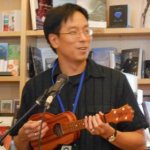 Once the applause and whistles died down, Mike dove into his workshop. To make a believable story with fantasy and sci-fi elements, the author has to seamlessly integrate those elements into a contemporary setting. He broke it down to two levels: Structural and Personal. 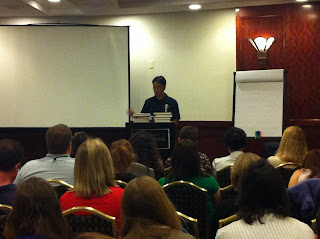 Mike is naturally funny and charming, and he kept the crowd laughing with his jokes and talk of sweating. (Sorry, Mike. Had to throw that in there). 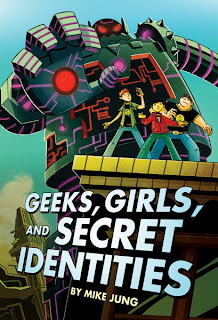 One question he advises authors to ask themselves is about the infrastructure. How does the fantasy affect society on the broadest level? Things like law enforcement, education, or media?

Authors need to see the big picture first--the structure before they can break it down to the personal level. He also stresses that authors need to have rules--and those have to be consistent if the plan is to keep the reader's trust and interest.

Posted by Suzanne Young at 2:39 PM