Matt de la Peña: Writing (and Reading) on the Wrong Side of the Tracks

Matt's one of SCBWI Western Washington's favorite speakers, and he's here to wow the summer conference crowd, too! 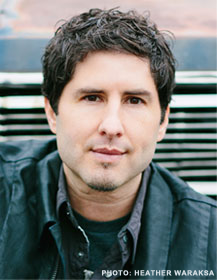 I really wish you could be here for this, Matt's one of the funniest and most insightful speakers a conference could hope to have.

He tells us a little about his background: Matt grew up in a Mexican American community, but Matt and his sisters were the only mixed race kids, and though most everyone in town spoke Spanish, Matt would get in trouble for speaking Spanish at home. Perhaps because of this he had some awkward moments early on with reading and writing. In elementary school Matt was late to learn to read, and from then on he defined himself as a dumb kid/bad at school. It wasn't until years later, when a teacher told him that if he went to college he'd meet a lot of girls that Matt decided to get serious about school and school sports.

Matt tells us a little bit about his family: sweet stories of a grandmother who gave recipe tips on her deathbed, funny stories of uncles who taught him how to sit close to women in bikinis on beaches before narrowly drowning him, and tough stories about race, anger, shame and guilt.


"I didn't know what [these stories] meant at the time, but the writer in me looks back at them in the rearview mirror and I figure it out... I can write about the shame of my uncle, about the shame my grandmother sometimes felt."


In college Matt finally read books that he connected with culturally and emotionally, The Color Purple being his favorite book. Reading Color Purple changed everything for him, he started to read a lot of Hispanic as well as African American authors. He kept writing poetry and playing sports and slowly discovered his writing style and personal point of view.

He wants all the writers and illustrators in the room to think a little bit about why and what they're working on. What is your point of view? Where are you coming from? He's not asking for a moral, he wants us to stop worrying about giving agents and editors what we think they want, but to write what we want to say.

Posted by Jaime Temairik at 3:00 PM