Henry Winkler and Lin Oliver are both inventors of many creative works in film, television and literature. Together they are creative partners and co-writers of the much loved series HANK ZIPZER: World's Best Underachiever. Individually they are hilarious. Together they are a riot.

To no ones surprise this session is standing room only and begins with a round of applause.

Together Lin and Henry wrote 17 books of the HANK ZIPZER series.

It's now being made by the BBC into a live television series. They are now writing some Little Hanks for the younger readers. So cool! 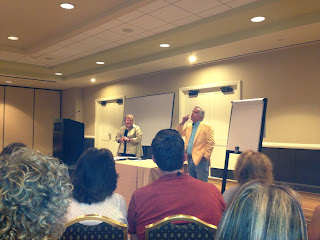 Henry was lucky because there was a lull in his acting career and his agent suggested he write a children's book about his learning difficulties. He felt he was too dumb, so how could he do that? Finally his agent suggested it again and he introduced Henry to Lin. Henry feels so lucky to work with her and you can feel the love.

They have written about 24 novels together. Lin has also written many others. While Henry has been in many movies and television shows.

Their first rule is that they have to make themselves laugh. You're writing your own kind of humor for yourself. Don't try to be funny for kids, on the kids' level. The fact of the matter is that we are all the same. So if you're connected to your material, if you think it's funny, someone else is going to think that too.

When something feels authentic, that's what makes Henry laugh while Lin loves character humor. They go hand in hand. Humor doesn't have to come from a joke, it can come from character.

The best is when you can make a reader laugh and cry at the same time. At the same time the funny thing happens there is also some pathos in it. 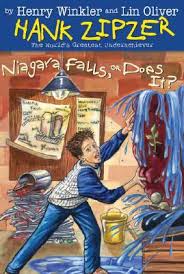 A title is a really important thing. An overtly funny title gives the readers a cue it's a funny book and it's okay to laugh.

Let me interrupt this blog post to let you know that these two are extremely lovable and wise. Wow!

It's important that the character you put in comedic jeopardy be loved and cared for by your reader.

Mean humor can make readers uncomfortable, it's like mockery. But if you love a character and something funny happens, we laugh right along with them.

"We have learned that kids know when it's authentic. Write what you know is true."

It's important to go on the journey. You have to follow the story, even if it deviates from the outline.

Go with your impulse. It's extremely important and valuable.