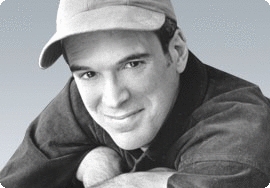 Peter Lerangis is something else--"nothing short of a human dynamo," as Lin Oliver put it.

More than 5 million copies of his 160 books have sold and translated into 30 different languages. They include the NYT bestseller THE COLOSSUS RISES as well as THE SWORD THIEF, THE VIPER'S NEST, and THE DEAD OF NIGHT. He's also written YA novels including SOMEBODY, PLEASE TELL ME WHO I AM and SMILER'S BONES.

Peter, who started out the morning not wearing pants, did remember to put some on for his keynote. Even so, he confessed to some nerves like he hadn't experience in a while. "The last time I was this nervous was when I had to do a video with Whoopi Goldberg," he said.

He started off by describing a school visit from someone who told all the seventh graders in his school that you couldn't make a living doing something creative--that you couldn't support a family and would always depend on others. He took this seriously, and as the oldest kid in a Greek-immigrant family, he faced a lot of responsibility for entertaining his siblings and cousins. He loved telling them stories.

"My idea of a great time was to shut the door in my bedroom, put a pad of paper on the desk and just let the words fly. My parents didn't understand it but they knew enough to let me do it," he said.

He was a troublemaker in class and used to like to write his books during math class. "I had a little spiral notebook hidden inside and was writing science fiction story." He had for consecutive Us for unsatisfactory in self-control. But one of his teachers predicted he'd be a writer and kept his poetry in her purse because she wanted to remember that she'd taught him. "It petrified the hell out of me."

He talked to us about why he loves writing middle grade best: "Most of us who write middle grade haven't really progressed past farting... part of what makes us good at this is our own lack of maturity."

By the YA-reader age, the audience knows what they like. They made the transition from family centric to peer centric. "Now they demand certain stories that are specific to what they care about."

Also, YA is more subject to fads. Middle Grade, by contrast, is forever.

Voracious middle grade readers will read classics as if they were written yesterday. They're young enough that they don't care about the occasional old-fashioned expressions. "They will buy into any book as long as the story is good."

There are kids this age who don't read. It's like eating vegetables or shaking hands with non-favored relatives (and probably a phase). With these kids, there is an opportunity to be a first taste of "wow." This is an opportunity and a privilege to serve them.

They're interested in right and wrong, where mom and dad end and friends begin. "They are negotiating betrayals and bribes, hypocrisies from adults."

Books can make sense to them. "If we do this right, we sneak inside a kid's head and present a world, a framework, a guided moral and ethical reality. In this reality, things don't have to be logical or fair... But they must make emotional sense."

"A book is a dock of possibilities into which readers sail the ship of their imaginations."

So how do we do this?

There are some rules (and he gave more, but we're just posting a sample):

a) Start with character always. "Populate your stories so the characters will be driving the plot. Not the other way around. You will never be sorry."

"Our job is to understand character. We are actors in the purest sense."

b) Write a killer first page. A page that makes it impossible for a reader to not want to go on. Kids won't go to page 2 if they don't like page 1. "I'm a pretty fast writer, but it'll take me a week to write that first page." You're finding your voice and your way into the book. If you do, your reader will, too. Keep descriptions of clothes and setting and weather very, very brief.

c) Include romance ... but only a little.

When he visits schools, he tries to make storytelling and creativity palpable. "In every crowd, I am looking for the kid who was me. You see it in their eyes. Chances are they've been encouraged by their teachers. Chances are they've also gotten signals, as I did, that this is not what you can do for a living."

It wasn't until he got into law school that he spent one summer as a singing waiter on Nantucket that there were some things he liked doing more than others. That maybe "smart" was wrong and "stupid" was me. A year after he started trying, he got cast in a Broadway show, and he also worked as a copy editor, and worked his way into the business from there.

It was an incredibly informative and moving keynote--and it's no wonder his books have connected so deeply with so many kids.