The Sid Fleischman Award is an award for exemplary writing in the genre of humor. The 2010 Award goes to FOOD, GIRLS AND OTHER THINGS I CAN'T HAVE author Allen Zadoff.

He said, it wasn't so funny being a 275 pound high school student like he was. When he wrote about FOOD, GIRLS he didn't write it to be funny, he wanted it to be the truth. He wanted to share the lessons, as an adult, that he learned from his adolescence. He said his character learned in two weeks what it took him 35 years to figure you.

He advises everyone to keep at it and to come to the SCBWI conference and meet people. And if you win an award, make it the Golden Kite, so he can get the Sid Fleischman again next year. He thanked his editor Elizabeth Law at Egmont (who had invited him to a past conference and introduced him people in the industry).

Look for Allen's next funny book MY LIFE, THE THEATER, AND OTHER TRAGEDIES (Egmont, May 2011). 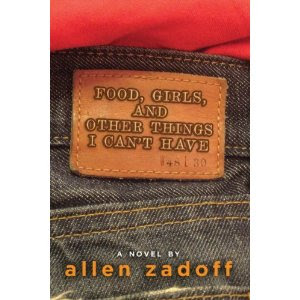