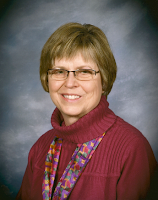 Not only did she give a beautiful keynote speech and teach a terrific class in picture book creation, Marion Dane Bauer is being honored today with a Golden Kite Award for the best picture book text of the year.

From the flap copy of THE LONGEST NIGHT:

It is the longest night of the year, and the snow lies deep. All through the forest, animals long for dawn's warmth. Strong and clever creatures boast that only they can bring back the sun. But the wind knows better. The wind calls Chickadee, whose simple song wakes the sun. In this lyrical story from Marion Dane Bauer with breathtaking watercolors by Ted Lewin, it will take a tiny and gentle creature to summon a new day. 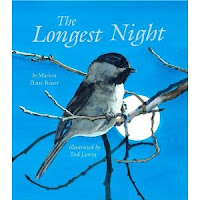 Lin Oliver says this about the book: "The language is poetic and perfect, each word conveying meaning and sound at the same time."

Marion originally was asked to write a picture book about St. Lucia's Day. It was tempting, of course, to write the real story of the saint, a woman who refused to marry a non-Christian and later served up her breasts on a silver platter to her parents.* But her passion lay with the Winter Solstice. She wrote more than fourteen drafts to get the book just so.

We're thrilled for her.

Learn more about Marion Dane Bauer on her website.

*Today's chicken breasts were not in homage to St. Lucia. We can't believe you even thought that.
Posted by Martha Brockenbrough at 2:03 PM