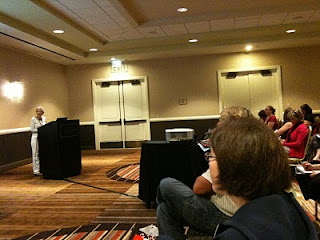 Gail Carson Levine has written 17 books for children. Her first book was "Ella Enchanted," which won a Newbery honor and was made into a movie. She blogs about writing here and wrote the nonfiction book, "Writing Magic" - with dozens of writing exercises for kids and the rest of us. She has a picture book and a mystery coming out, and she's sharing with us responses to questions she's had from writers and others...

WRITING FROM A MALE POV (If You're a Woman)
Try thinking of somebody in particular.

When she wrote a character who was trying to keep it's gender a secret, she had the character bow to a Count and then curtsy.

A bow and curtsy are shortcuts, and we need shortcuts because we don't have an eternity to establish a character - but shortcuts can tend towards stereotypes, so use them with care.

Establish your character's gender early - because it's jolting to be reading it wrong.

And she advises to get a guy to read it to make sure the character didn't act in a way that isn't credible.

NAMING CHARACTERS
Find a name that fits but isn't too obvious.

Think of what your character is like, and go to the thesaurus - look at the synonyms. If your character is Moody - Melancholy. Melody? Petulant. Petchula? What about nicknames? The name could be Michael, but his friends could call him "Mope." (He might not like that, and it would just make him mopier!)

SETTING
Be aware of the dangers of information dumps in the first chapter. (Though it worked in "Tuck Everlasting," she says in general to avoid it.)

Setting can be a tool for character development.

In an action scene, you don't necessarily want to stop to describe what the character is wearing. But if you drop in early that the hero dresses in his usual baggy pants, and then wham! It's a problem when he's riding his bike in that chase scene.

And for what happens:

If a fishtank is going to explode and you need to set up it's there first for the reader when the character enters the living room, think about the character NOT saying "Julia, I see your Dad still has his fishtank."

Consider the character saying "I always think those fish are staring at me."

Or the character thinking, "The room always felt heavy to him, two sofas, fish tank, leaden curtains..." - You drop it in there and when the fish tank explodes, the reader will be surprised but will also accept it.

She looks at pictures and art as inspiration for the details she uses for her characters.

She's also sharing writing prompts throughout this session. Like the idea of taking one of your characters with you when you go somewhere - what does your character notice? miss? react to emotionally? Write it down when you get back.