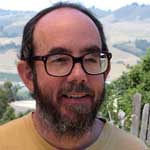 Paul Fleischman is the Newbery Award-winning author of JOYFUL NOISE: POEMS FOR TWO VOICES, among many other lauded books.

A musician, former bookseller and one-time proofreader, he founded ColonWatch (not for proctologists) and The Society for the Prevention of Cruelty to English.

He's also the son of the beloved and much-missed Sid Fleischman. How jealous are we that he got to grow up listening to Sid's books being read aloud as they were written?

To make up for that colossal injustice, Paul is talking today about Surviving the Novel.

He's starting his talk by likening novels to the snow-capped Himalayas (particularly for people who are used to writing in short form). He knows how we feel--he just wrote his first adult novel and hoped he could hit 200 pages. (He did that and more. So much more.)

On organization
It's easy to feel overwhelmed with the "big glop" of a thing that is your novel. To combat this feeling, he organizes. He sets up separate documents for all of his material in sections like these:
Tips for research
Writing
Quotes to remember

Paul's speech was so full of quotes, you could compile them in a book. Here are some favorites:

"This [the outline] is holding back the Barbarian hordes of chaos from overwhelming your book."

"In a picture book, you can afford to rewrite your whole manuscript. You're not going to want to do this with your novel."

"The older I get, the more I write like my father, who was quite the improviser...Now, I trust much more things coming together."

"Back when the pencil ruled the earth, like the dinosaur, you could still read what you crossed out."

"Research should be like a slip. It should be there, but it should never show."

"If you have the same spouse you had at the beginning of your novel, that person might be a little tired of your travails by the end."

"When you are writing a novel, you are part of a community that stretches beyond your family, beyond your critique group. You're part of a community that stretches across the world and across time. With luck, you come out of it stronger and wiser and you might even want to do it again."
Posted by Martha Brockenbrough at 7:24 AM