Judged by writers of the fiction genre to be the best fiction book of the last year, "Sea of the Dead" is the winner of this year's Golden Kite Award. 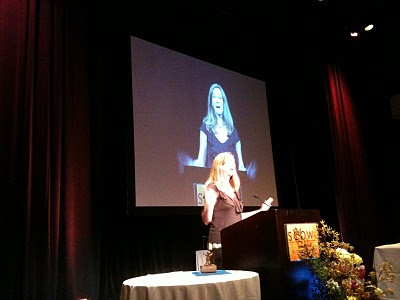 Accepting the award, Julia Durango shares that the reason that she writes is that all her books contain secret messages, to her children - a footpath of memories to freeze time with her sons. She may not have a magic spell to hold her children at 2, or at 13, but in her books,

Cha Cha Chimps- it might look like a counting book about dancing monkeys. But there is a secret message in the book to her son... It's hard to be the mother of a 2 year old, but her heart is so full of love for him, and if only she could keep him 2 forever...

Sea of the Dead - on the surface, it's an adventure about two empires at war. But there is a secret message to her 13 year old son in that... It's hard to be the mother of a 13 year old, but she knows he's off to find his own path, and she can't keep him with her forever.

But in the book, she has.