How to Be a Spaceheadz: a Multimedia Thingy* Starring Jon Scieszka 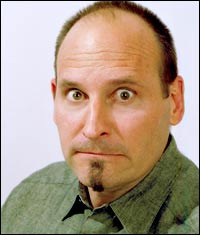 Here's the sad truth about Jon Scieszka: Though he is a man, he doesn't actually smell like stinky cheese (usually). But it's OK. It really is, because there's no one who gives better, smarter, or funnier advice about writing for children.**

The full title of his talk was How to Be a Spaceheadz: The Ups and Downs and Sideways of Telling a Story Across Multiple Media. (The sign outside the room omitted the final Z, but people managed to find the room anyway. Even that Mac Barnett guy.)

OK. So multimedia is a huge opportunity for us, Jon says, because no one has any idea what it really means (which you can tell from looking at at some of the early stuff out there). 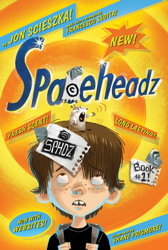 Kids today know how to use technology, but they don't really understand the difference between story and advertising. Jon's new series, SPACEHEADZ, aims to help make these kids media literate. It imagines a trio of aliens who've learned everything they know about earth from watching television. They come to earth to recruit humans.

* Is it just me, or is it hard to think of words after last night's party?
** When Madonna has schedule conflicts, that is. Because that lady, she is a major hoot.
Posted by Martha Brockenbrough at 11:21 AM