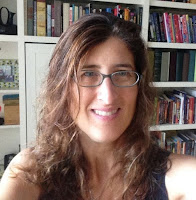 Carolyn Mackler is the acclaimed author of the YA novel The Earth, My Butt, and Other Big Round Things (A Michael L. Printz Honor Book) and its brand-new sequel, The Universe Is Expanding and So Am I. She is also the author of Infinite in Between, Tangled, The Future of Us, Vegan Virgin Valentine, Guyaholic, and Love and Other Four-Letter Words, and the middle grade novel, Best Friend Next Door. Carolyn’s award-winning books have received many starred reviews, appeared on best seller lists, and been translated into more than 25 languages. She is currently finishing a middle grade novel, midway through a new YA, and thinking about a novel for adults.

Mackler's interest in viewing adolescence through the body can be traced back to her own adolescent experiences--as a teenager in a body that seemed very different from the bodies of her schoolmates. "The body was so angst-y for me."

"I write realistic fiction," she said, "and the body will come up continually--it's a constant conversation at all ages, whether you're five and hoping to grow, or 15 and hoping stop growing, or 45. Everybody has a teen story."

She recounted experiences from her own adolescence, ranging from sexual aggression to sexual empowerment. "The body has both power and limits. This is why I write YA. This is why I read YA." Judy Blume was a favorite author because she dealt with things like boobs, scoliosis and sexual awakening.

Mackler described how one has body issues, body concerns in adolescence--pimples, thighs, too skinny, too fat, too big, not big enough, not hairy enough, too hairy, the wrong kind of hair, too light, too dark, stretch marks. "A body no being a problem didn't ring true to me."

"There is so much going on around adolescence and body. I read to help me understand the weirdness," Mackler said. She also noted, "Books are the safest place to learn about sex. You can close the book, you can let it go over your head... You read about it to learn so you don't have to do it."

"You never know what a kid needs--that's why we write."

Many of the books mentioned in the workshop--Dumplin', Puddin'--were by white writers and/or featured white, cis main characters. Here's a few diverse recommendations:

Gabi, A Girl in Pieces, by Isabel Quintero. Somehow it's often left off of positive fat representation lists. It doesn't center her weight; she also ends up with a cute boyfriend..

Girl Mans Up by M-E Girard.  A gender-non-conforming gay teen figuring out she she belongs and how to be herself (and gets a bad-ass girlfriend along the way).

Piecing Me Together, by Renee Watson. A Black teen discovers herself as an artist. It touches on weight, also attractiveness, racism and other issues, as the occur in life. Brilliant.

The Poet X, by Elizabeth Acevedo has a MC who is living out issues of power and control in her body--her mother's fear of her sexuality is SO real, as is her own struggle with it.

Yaqui Delgado Want to Kick Your Ass, by Meg Medina. A young teen is bullied and the effects are played out on her body. Searing. A must-read.
Posted by Adria Quinones at 11:30 AM