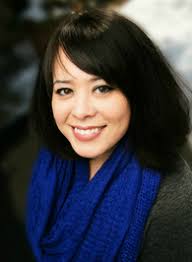 Erin Entrada Kelly is the author of 2018 Newbery Medal-winning novel Hello, Universe, as well as The Land of Forgotten Girls and Blackbird Fly. Her latest novel is You Go First.

When someone tells Erin a book or movie is dark she thinks it's further removed from hope. When writing, Erin is compelled to those ideas because when a book is dark she believes the more interesting and colorful the journey back.

Like many kids Erin went from Judy blue to Steven King. She loved to wallow in anything dark, disturbing, or depressing. She created many mixed tapes, mostly labeled "depressing music."

She also loved horror movies, ones that illicit a response that wasn't joy. Erin wasn't a happy kid. She wanted something that allowed her to embrace the sadness she felt as a young person.

What was the initial kernel of one of your books?

All of Erin's books start with character. They come to her and she starts asking questions. With Hello, Universe Erin saw a boy in a well and a girl above ground who didn't help him, and Erin had to ask herself why.

How do you deal with writing those really difficult scenes?

When writing a difficult scene Erin has to write it all at once. She usually needs a good first line, and then it's like pulling the thread and unraveling it. But once she stops she might not be able to pull the thread again. Even though she's taking them there, sometimes it doesn't feel like it. Erin has to be mentally there.

"If I can get that first sentence, I can run with it--usually."

Share a time when your editor helped you through a difficult spot or a time you had to stand your ground:

Erin has not run into disagreements with her editor which is unusual. "I wish I had a good story to tell where I put my foot down, but I don't." But her editor does always hate her titles.

Your books are out in the world, so how do you respond to critics who say they're too sad or dark for kids?

Erin says one of the greatest disservices we do is underestimating young people. We fail to recognize they are already in a real world with real feelings, and that we were once that 12-year old

Critics often times are coming at it from a grown-up angle where you don't want kids to experience those terrible things, or worry if kids read about sad and terrible things they will suddenly be depressed.

We should never patronize young people.

The only time Erin has ever gotten that "too dark, too sad" feedback is from grown ups, never from her kid readers.

Can you share an interaction with one of you kid readers?

Erin shares a tweet she received from a reader that said: I just read your book. It was decent.

Erin's take-away for the crowd:

"Write the story you were meant to write." 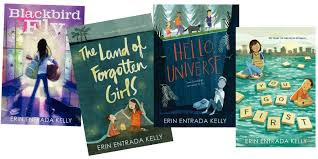