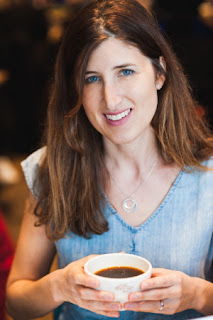 Carolyn Mackler is the author of Printz Honor Book THE EARTH, MY BUTT, AND OTHER BIG ROUND THINGS and many many more. Linda Sue Park introduces each author by reading a first line from their books, Carolyn gets two:

From THE EARTH, MY BUTT, AND OTHER BIG ROUND THINGS:

"Froggy Welsh the Fourth is trying to get up my shirt."

And from THE UNIVERSE IS EXPANDING AND SO AM I:

"Froggy Welsh the Fourth is trying to get in my jeans."

Linda Sue asks the panel what they think 'dark' means to them in literature.

"I see dark as just part of life," says Carolyn, "Shit happens, and it sucks. When I'm writing those themes come up. Leaning into the sadness that happens in life is like leaning into the light of life and finding humor in the sadness."

Did you like reading dark books as a child?

Carolyn mentions AUTUMN STREET by Lois Lowry as a book that she loved as a kid. A book that has so much sadness in it. Carolyn says she never read FLOWERS IN THE ATTIC type books, she wanted 'real sad.' Carolyn was so compelled by the complexity of the main character, who's only six, because she was feeling all of those complexities as a kid, too. 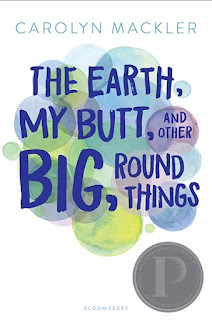 How did you get the idea for your book?

With EARTH, Carolyn wrote most of it in the summer of 2001, pre-9/11. She was coming out of her teens and twenties, and thinking about how rough her relationship was with her brother growing up.

So the kernel of that turned into the idea of a curvy teenager in a family of Manhattanite, image-obsessed pretty people and how their family interactions go.

With UNIVERSE she wanted to get beyond fine for Virginia. Carolyn had gotten beyond "I'm fine, I survived my childhood/family" she had gotten to awesome. "I wanted to get Virginia to awesome. I wanted to give Virginia more. Carolyn also mentioned there was a guy elected president that has done and said a lot of terrible things to and about women, and Carolyn felt Virginia had a lot to say about all of THAT.

Linda Sue asks how do you write the dark stuff?

Carolyn says she's with 'the dark' all the time, so writing 'dark' is no different than thinking about whether or not your kids are safe or near death in real life. And that after she does write the tough fictional scenes, she can at least go spoon her dog or eat a sandwich, it's not 'real,' you can pull yourself out of it, so that's pretty great. 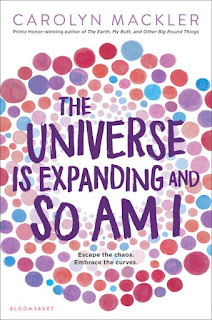 About the reception of the books:

EARTH is one of the most banned books in America—it's been called anti-family, having sexual content, inappropriate for age levels...

Carolyn didn't plan on needing to do public statements debating book censors when she wrote her book, but she can, and more importantly, she can pull out the hundreds of emails and letters from girls and boys who say Virginia helped them feel good about their bodies for the first time in their lives, or that they stopped cutting, or that it even helped them grieve through a parent's passing. Parents, too, have written to Carolyn to tell her her books helped them see how they were treating their plus-sized daughter poorly and inspired them to be better.

The rule around our house is you read what you want. We don't know what teens are going through, it's our job to provide real honest stories and let them reach who they need to reach.

Posted by Jaime Temairik at 3:50 PM