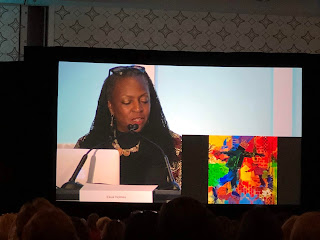 Artist and independent curator, Ekua Holmes, took the children's book world by storm in 2015, with illustrations in her debut picture book Voice of Freedom, Fannie Lou Hamer: Spirit of the Civil Rights Movement, written by Carole Boston Weatherford. The book won a Caldecott honor, a Sibert honor, a Boston Globe-Horn Book Award, and much more.

As a child, Holmes didn't see many images of Black people in art. For that reason, when she became a professional artist, she determined to reclaim her history and legacy through art and design that she would create.

At an early age, she began collecting bits and scraps of things found around her home and community, filling her closets to overflow—a coping mechanism, she pondered, after losing her father at the age of eight-years old.

She was already an accomplished artist before an editor at Candlewick Press approached her about illustrating a children's book, but she jumped at the opportunity. First, however, she had to make the transition from artist to illustrator. That meant creating sketches before final art, so that editors could see her progress along the way—a new concept to the fine artist. That said, with any mixed media, she admitted, final art changed along the way.

The book, of course, was an overwhelming (literally, to her) success, and now she visits elementary schools, public libraries, and travels to cities all over the country.

Some of the art on display during Ekua Holmes' keynote: 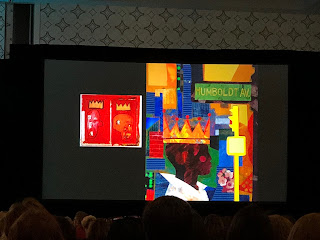 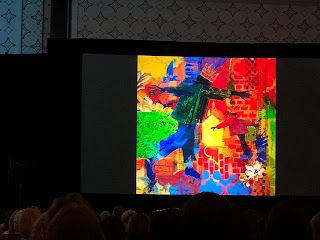 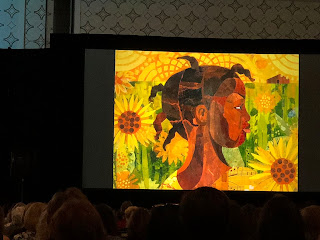