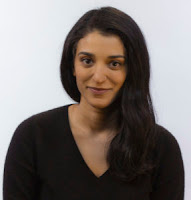 Namrata Tripathi is VP & publisher of Kokila, a newly-formed imprint of Penguin Young Readers dedicated to centering stories from the margins. Kokila publishes picture books, middle grade, YA, and graphic novels. The Kokila list will debut in summer 2019. Previously, Namrata held editorial positions at HarperCollins, Disney-Hyperion, and Simon & Schuster. She is the editor of the picture books Islandborn by Junot Díaz and Leo Espinosa and The Book of Mistakes by Corinna Luyken; the middle grade novels The Night Diary by  Veera Hiranandani, and Circus Mirandus by Cassie Beasley; and the young adult novels Where Things Come Back, Noggin, and Highly Illogical Behavior, by John Corey Whaley.

The History
Kokila was born out of optimism and frustration," Tripathi explained. "I wondered, what could I do to contribute to a more inclusive publishing industry?"

Tripathi discussed the diversity statistics cited by the CBC, which found that while diverse representation had risen, the number of diverse creators (especially Latinx) had actually fallen. Lee and Low's study of the children's publishing industry found that it was highly homogeneous (white, female, straight).

Her hope is that Kokila can address three things at once: 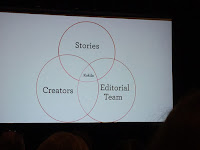 Tripathi's vision is a "brain trust," where everyone at Kokila can come together to lend their expertise and voice, in order to create a "deeper, intellectually rigorous process" where, if creators don't have to spend time teaching about their background, they can spend the time creating richer stories. Her view is very much something that is greater than the sum of its parts, where everyone is invested in the model and the mission. 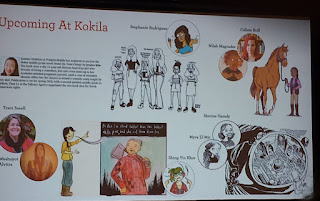 
The Logo
"Kokila" is the Sanskrit name for the koyl bird (a type of cuckoo) of Southeast Asia. "It has literary significance because it sings before the monsoon. It's a harbinger of new beginnings," Tripathi said.

The Q&A
A number of people asked whether Kokila would only publish only POC. Tripathi was extremely careful in how she stated Kokila's mission, which includes being wary of stereotypes. "Writing outside of your own experiences requires empathy research, work, patience, pushback and more work," she noted. "Most people don't want to do that."

Among the questions asked was one from a white illustrator who decried the fact that many publishers prefer "own voices" and seemed to be seeking permission/validation. Tripathi gently suggested that the illustrator interrogate her concerns/unhappiness.

Another attendee asked, "With so many new imprints dedicated to publishing diversely; aren't you worried about the competition?" Tripathi answered, "This question sees
marginalized writers as commodities... The idea of pitting one against the other is BS and I'm not here for that."

"Diversity is not a trend--another statement that makes me angry."

Posted by Adria Quinones at 1:00 PM